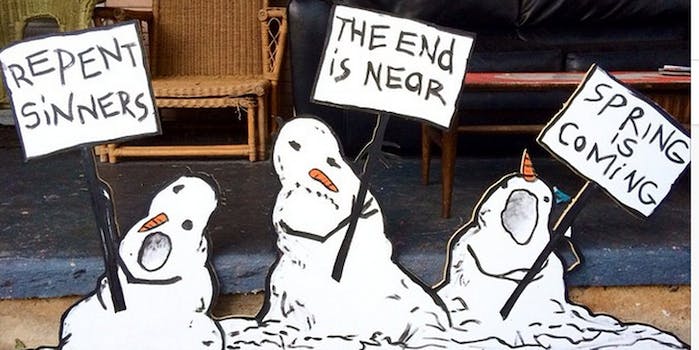 If only they sold these angry snowmen alongside regular Christmas decorations.

If you’re already sick of seeing Christmas decorations everywhere, you’re not alone. Cutesy holiday-themed lawn ornaments are probably the worst, but fortunately this Etsy artist has the solution: Calvin and Hobbes snowmen.

Calvin’s horrible snowmen are a staple of the classic Bill Watterson comics, as each winter brings a new tableau of snow monsters decapitating each other or cannibalizing their own bodies to make ice cream cones. They’re basically the pinnacle of the snowman art form, and artist Sean Daigle’s versions are a perfect tribute.

So this is the last of the #calvinandhobbes #snowmen #paintings. It is made of two 8ft long wood boards nailed together and was just about the worst possible thing in the universe to jigsaw as it weighs about billion pounds (more or less). It is for sure the biggest piece Ive ever made and please cross your fingers that some dumbass doesnt walk up and try and take a selfie with it or something because if it falls over, it will no doubt murder the fuck out of them. #snowgoons #billwaterson #christmas #art #classinupthejoint

Calvin and Hobbes creator Bill Watterson never licensed his characters for use on T-shirts and merchandise, but there’s nothing stopping fans working on noncommercial projects like this. Honestly, we wish we had the time and skill to make some of those angry snowman ornaments ourselves. They’re an ideal antidote to overzealous holiday cheer.