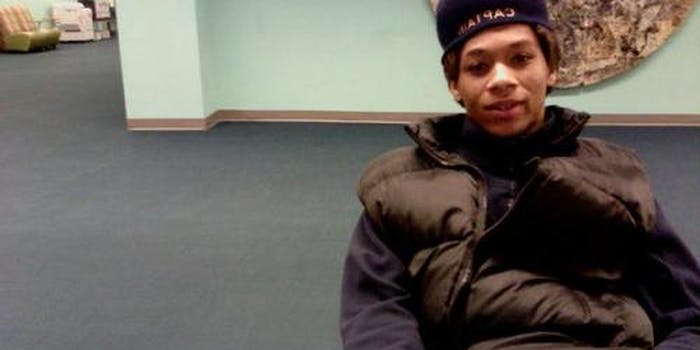 A student made a bad joke on Tumblr, and now he can’t blog until 2018

Caleb Clemmons, 20, wrote on Tumblr that he was going to shoot up his college. He had no weapons.

A 20-year-old in Georgia served six months in jail. On Tuesday, he pled guilty to making terroristic threats and was sentenced to five years’ probation—including a ban from social media. His actual crime? Writing on Tumblr that he was going to shoot up his college. The teen had no intention of doing that, and had no weapons in his possession.

Caleb Clemmons has been the subject of a number of articles and social media posts since I first wrote about his story last week. Many were critical of his actions, saying he deserved whatever jail time came his way. For his part, Clemmons claims he wrote the post as a character he had created on his Tumblr, “Ryan Lang,” a persona he created to reflect the desensitization of young people on the Internet.

The Clemmons case, the second in under a month in which Georgia has prosecuted someone for online speech, represents a new kind of crime in the digital age—one where a threat, done as a performance, is considered an act of terror.

Clemmons’s Tumblr, the only evidence against him, is a mix of some of the basic stuff you would see on a 20-year-old’s Tumblr: stupid jokes, thoughts on Honey Boo-Boo, flirting with girls, responding to his anonymous followers. He often introduces himself as the Ryan Lang character: “hello my name is Ryan Pritchard Lang. I created both the dunk and the missed dunk.” There are a few weird videos Clemmons made, one eating a watermelon and another of him dancing in his long johns to some electronic music—the type of strange, half-baked art you’d expect any undergrad to produce.

The only other reference to a school shooting was when he wrote briefly about the Columbine shootings. He says he would have been nice to the shooters before the event, so he probably wouldn’t have been shot. Then he made a joke about R. Kelly. He wasn’t being all that serious.

Clemmons composed the threat on Feb. 7. “Hello,” he wrote. “my name is irenigg and i plan on shooting up georgia southern. pass this around to see the affect it has. to see if i get arrested.” Only three hours later, Clemmons, sure enough, was arrested.

Clemmons, as his mother pointed out in an online plea for support of her son, has not had an easy life. He’s had two prior run-ins with police, both for minor infractions. Still, Clemmons entered Georgia Southern University on a scholarship, immersing himself in his writing and pursuing a degree in psychology.

Alice Smith, a friend of Clemmons who is helping with the effort to raise awareness about his case, wrote to me that in the months leading up to his arrest, Clemmons began posting solely as Ryan Lang. “Basically he went really in depth with internet desensitization which he believed is advancing teenage ‘sociopaths’ and narcissism,” she wrote. “He was using the internet as a giant high-tech mirror to document his existence.”

While the quality of Clemmons art is up for debate, it’s clear the he had been posting with the intention of creating it. But Clemmons doesn’t have a right to free speech here—his post posed a clear danger to security. It wasn’t substantial, but it was a threat nonetheless.

With the rise of social media, however, it’s easier than ever to broadcast an empty threat to a large audience. And while it distracts law enforcement from actual security issues, does the punishment for the cyberspace version of pulling a fire alarm fit the crime?

Last week, Georgia found a 33-year-old man guilty of the very same crime that Clemmons is charged with. Steven Martin Michael posted on Facebook that he would become famous by shooting up a school. He had no weapons or actual plans to attack a school, but he will now serve two years in prison on a felony charge.

Without a set of guidelines for the punishment of people who post threats on the Internet, young people like Caleb Clemmons will continue to see their lives dismantled by a misguided, impulsive act. Clemmons has been kicked out of school, and a felony charge will follow him throughout his life. In a nation where actual threats of shooting politicians are a regular occurrence, why is an empty threat, addressed to no one, that much worse?

“He probably thought he could get arrested but he never expected to experience long-term incarceration or a $20,000 bond after no weapons or anything were found,” Smith, his friend, wrote to me. “His post didn’t cause any panic and anyone can decipher that it wasn’t a serious post… he literally introduced himself as the character he made up.”

While in jail awaiting trial, Clemmons has told friends that he’s been the subject of harassment and violence. Still, Smith told me, he’s trying to stay positive.

Clemmons has been banned from entering four counties in Georgia, including the one his school, Georgia Southern, is located in.

In North Carolina, a similar ban on social media use was found unconstitutional Tuesday. The ban on Clemmons’s social media use will be tough to enforce: What counts as social media? Can Clemmons continue his artwork through a website he owns and runs? Whether the state was justified in removing his rights, like a drunk driver with a license, will be an ongoing discussion for these types of incidents moving forward. In the coming years, courts across the country will have to decide whether someone writing on the Internet ever deserves serious jail time—and, for students, the loss of access to education.

In a petition for his release, Andrea Morris, Clemmons’s mother, wrote, “Though Caleb may have chosen the wrong time to post a prank, his present punishment and possible fate is beyond my comprehension.”