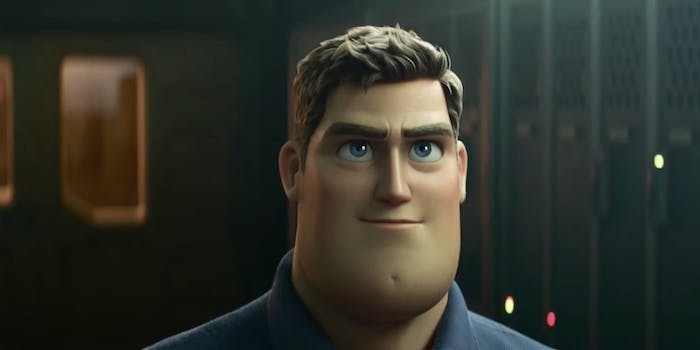 This probably wasn't what Pixar was aiming for.

Disney’s new Buzz Lightyear spinoff is precisely the kind of movie that leads people to wonder, “Who asked for that?” Spinning off from the Toy Story franchise, it casts Chris Evans as the voice of the “real” Buzz Lightyear, the human space hero upon whom the toy is based. So it’s an origin story for a fictional doll.

When the first trailer for Lightyear arrived this week, it inspired two diametrically opposed responses on social media: “Is Buzz Lightyear hot!?” and “Buzz Lightyear looks like a racist cop.” In the words of one Tumblr post: “The vibe is serial killer, it’s man who stares too long and too intently at the gas station, it’s giving sundown town, it’s ‘this guy was at the Capitol.'”

“Real Buzz” is still recognizable as the same character, but there are some obvious differences compared to Toy Story‘s Buzz. He has visible hair (!), heavier brows, and smaller eyes. This makes sense because while the Toy Story character was meant to look goofy and naive, Lightyear‘s Buzz is a real astronaut. He’s a white guy with a big jaw and a stern expression, and if you search “Buzz Lightyear cop” on Twitter, the results speak for themselves.

Honestly, this meme is just picking up what Disney and Pixar are putting down. Buzz Lightyear’s official job title is “space ranger,” which definitely sounds like a cop-adjacent career. He looks the part!