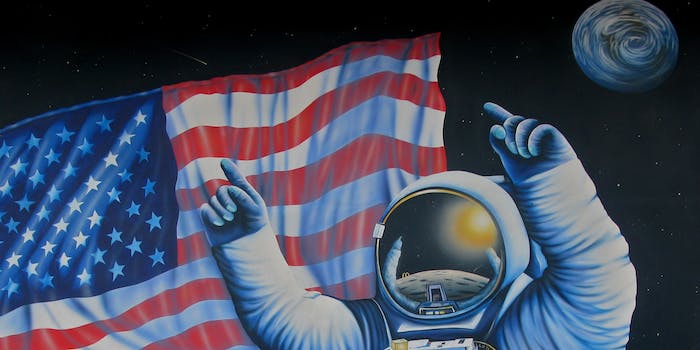 Celebrate the 44th anniversary of the moon landing with a GIF

A lot has changed in the four decades since Buzz Aldrin and Neil Armstrong set foot on the moon.

This weekend the moon footprints of astronauts Neil Armstrong and Buzz Aldrin turn 44.

Armstrong and Aldrin descended from Apollo 11‘s lunar module onto the moon’s surface on July 21, 1969, becoming the first humans to ever do so. Yet while Armstrong’s quote, “One small step for man, one giant leap for mankind,” is one of the most recognized in history, Aldrin’s first words on the moon are often overlooked.

“Isn’t that something!” Armstrong responded. “Magnificent sight out here.”

In recognition of Aldrin’s achievement, Reddit user orbojunglist transformed a photo of the now-83-year-old on the moon into a stereoscopic GIF.

Following the Apollo 11 mission, Aldrin, unlike fellow astronauts Armstrong and Michael Collins, has become a pop celebrity. In 2010, Aldrin was a contestant on Dancing With the Stars and has become a popular Twitter user. Aldrin has also been an outspoken supporter of sending astronauts to Mars.

“When you go to Mars, you need to have made the decision that you’re there permanently,” Aldrin told Vanity Fair in 2010. “The more people we have there, the more it can become a sustaining environment. Except for very rare exceptions, the people who go to Mars shouldn’t be coming back. Once you get on the surface, you’re there.”