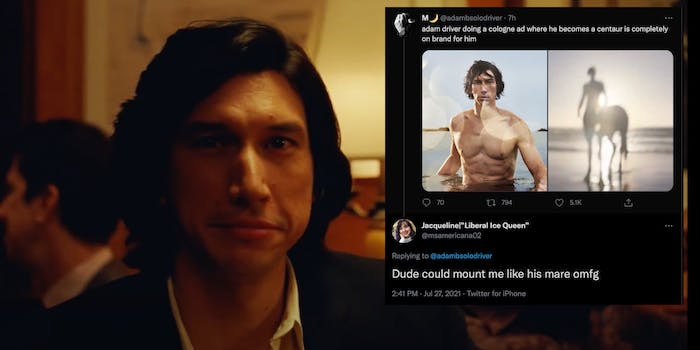 Driver and Burberry joined forces to create a commercial filled with underwater sequences starring the actor and a horse set to the ethereal “Two Weeks” by FKA Twigs.

Only at the end of the commercial is it clear what exactly Burberry is selling: its new cologne Hero.

The ad is 26 seconds long and starts with a shirtless Driver sprinting on the beach toward the ocean. The montage-with-horse then ensues. At some point the two emerge from the water and are standing on the beach, blurred in the background as Driver’s voiceover introduces the product.

This last image is causing the most stir on social media, as it looks like Driver and the horse have combined into one centaur-like creature.

Memes to the tune of the ’90’s “Animorphs” soon arose:

Others, like @adambsolodriver, simply acknowledged the magic that was unfolding in front of them.

Desus Nice, of SHOWTIME’s Desus & Mero, rejected the campaign and claimed Alex Rodriguez as his one true centaur.

Amid all the jokes and confusion, though, there was another clear emotional reaction to the ad: people want to fuck centaur Adam Driver.

“Dude could mount me like his mare omfg,” responded @msamericana02.

“Especially, if he’s hung like that horse,” seconded @boricuamagee.

“What is this selling 😂?” asked @SethReeves15

The effects of the product don’t seem to have a clear horse connection, but Twitter doesn’t care. People want centaur Adam Driver, and they want him now.