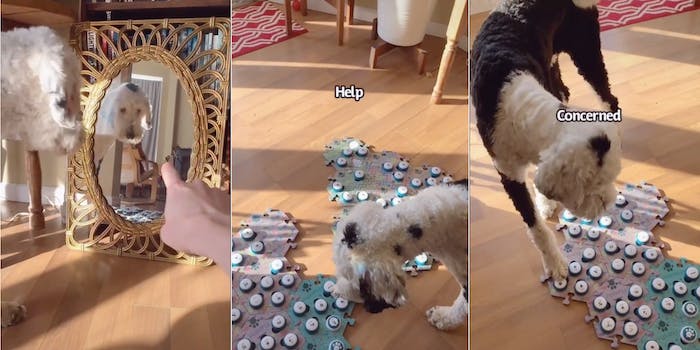 Did Bunny just become conscious of who she is?

Is a popular TikTok dog trying to tell us that she’s distressed in 2020? That’s what many people online believe after “talking” dog Bunny, aka @what_about_bunny, pressed the “help” button on her mat of speech buttons in a video this week. She also pressed the “no” button when her owner, Alexis Devine, instructed her dog to look into a nearby mirror.

“Bunny is a button away from needing an emotional support dog,” comedian and Daily Show correspondent Jaboukie Young-White (@jaboukie) wrote in a tweet on Tuesday night that linked to the video.

“I can’t deal with Bunny the Dog’s impending existential crisis,” wrote user @EdwatsGROSS. “I am too busy with my own.”

Bunny is a 15-month-old dog who has more than 5 million followers on TikTok. Her claim to fame is “talking” to her owner through a mat of prerecorded speech buttons, the same kind that nonverbal humans use to communicate with others.

As the Verge reported on Nov. 11, the dog now has over 70 buttons to push. For the most part, Bunny’s messages are basic: She asks for cute, normal dog requests like scratches or playdates with her dog friends.

But in the last couple of weeks, Bunny’s messages have turned broader. For example, she appeared to ask “who this” before looking in the mirror in a Nov. 14 video. But upon closer inspection, her owner thinks she pressed “oops” instead of “this.” Bunny also began pressing buttons to indicate that she understands time, and the difference between morning, afternoon, and night.

In a video on Tuesday, Bunny appeared to be conscious of her own self again. She then pressed the buttons for “help” and “concerned,” leading worried fans to think that Bunny was having an existential crisis. “What if Bunny is a reincarnated person only now realizing that she is trapped inside a dog?” one commenter wrote on the TikTok video.

Bunny’s appeal is easy to see. Any dog owner (or dog lover) wonders what their dog is thinking about. This dog appears to be communicating something. She could just be pressing random buttons based on what gets the most attention from her owner, but it’s more interesting to surmise that she has learned how to communicate.

The possible existential crisis has led TikTok users to make memes and parodies about Bunny.

Maybe in a few years, Bunny will learn how to make her own meme.