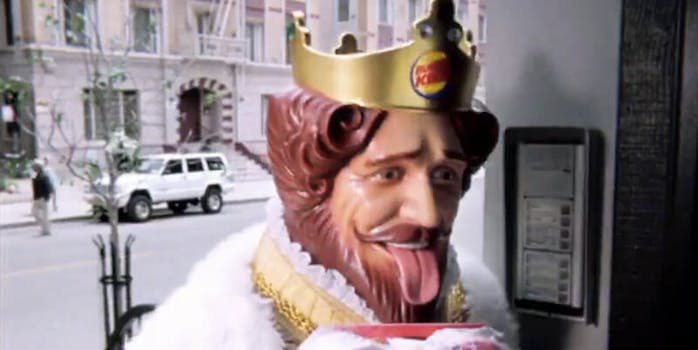 Because clearly they hate us.

In case you haven’t looked around lately, things have been better in America. We’ve got a former reality TV star and failed steak entrepreneur in the White House who—as of just yesterday—is now going to be presented with the opportunity to appoint a second Supreme Court justice, which will likely mold the country in scary, dystopian ways for decades to come.

Need more evidence that we’re living in the darkest timeline? Budweiser is bringing back its nauseatingly obnoxious “whassup” marketing campaign that annoyed television audiences from 1999 to 2002.

Oh, and for added misery, this time Burger King is involved—and so is their creepy mascot, for that full nightmare effect!

The partnership between the two brands is to promote Burger King’s limited edition “American Brewhouse King” sandwich, which is being released to coincide with the Fourth of July holiday next week. The burger is being described as an “epic, bold burger that celebrates America,” and features two beef patties topped with “thick-cut smoked bacon, crispy onions, tavern sauce, American cheese, and creamy mayonnaise.”

We have no idea what “tavern sauce” consists of, but our gut tells us it’s probably mayonnaise-based. Burger King heard you liked mayonnaise, so it’s putting mayonnaise on your mayonnaise.

Think it can’t get worse? Think again! According to AdWeek:

At any rate, as news of the revived campaign hit Twitter and the two brands began actually tweeting at one another, Twitter reacted accordingly:

this is the first thing you see when you go to hell. pic.twitter.com/Z7R9c80Tup

Burger King and budweiser need to calm the fuck down pic.twitter.com/gwruFvEoOl

And then the whole thing came full circle with a take on the “Ladies, Imagine This” meme:

The year is 2118, your grand child is doing a DBQ on this image in their world history class, Budweiser and Burger King’s twitter hasn’t released anything than the letter A in 50 years. pic.twitter.com/mb9HTJEIgw

We all knew Idiocracy was inevitable, but the breakneck speed at which it’s accelerating is absolutely dizzying.