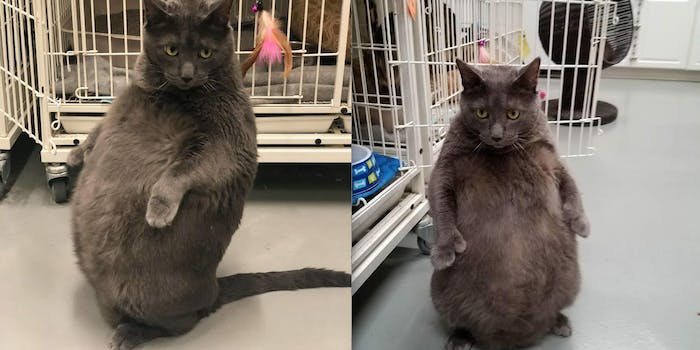 Everyone wants to adopt this big, high-maintenance cat named Bruno

Get outta here with your Garfield. Bruno's in now.

How extra are you? Are you so extra that you refuse to eat without physical affection first? Are there only certain places you’ll drink water from?

You may be a match for Bruno, seemingly one of the world’s most high-maintenance cats. The 7-year-old is currently up for adoption via the Illinois-based Wright-Way Rescue, and he’s caused quite a stir with his unique proportions and larger-than-life personality.

Ever since Wright-Way Rescue’s listing for the 25-pound cat hit the internet, folks have been fighting tooth and nail to bring him home. Because he may sound like a ton of work, but he also seems like the most charming fellow you’ll ever meet.

TOO COOL TO BE HOMELESS!We're not sure how Bruno hasn't found his forever home yet! He's the COOLEST cat!Hi, my name…

For one, just look at this guy. The potato-shaped feline is said to be “perfectly healthy” aside from being overweight—he also has polydactyly, which means he has little cute kitty thumbs. The animal rescue states that he’s on a diet, and he’s being tasked with exercising to lose some weight. Perhaps he’s friends with fellow fat cat Bronson?

All those things are pretty normal, though. But believe us when we say that Bruno’s got quite a few, well, idiosyncrasies to deal with.

For one, he loves to relax and lay around the house, but only likes to play with his feather wand toy. You can forget just about anything else. And if you don’t scratch him specifically on his face and neck (or the side or the top of his head and spine), you may be in for some scratching or biting. He doesn’t like tummy rubs, which is a little disappointing with his fluffiness. He may, according to Wright-Way, “pretend to bite” and “swat” if you try.

One of Bruno’s weirdest quirks is that you’ve got to pet him while he eats, and if you stop, well, he might just stop eating. Considering most animals aren’t all about being bothered while they’re trying to chow down, this is pretty strange. We’ll do you one even better: He won’t drink his water if it’s in the kitchen with his food. If you want him to drink, you’ll have to just litter your home with water bowls to make sure he has adequate hydration.

Despite all this weirdness, Bruno’s just a big sweet boy who needs a home, and everyone seems to want him. People have even gone so far as to write songs about how much they love this adorable cat.

"Gimme that fat cat"Yes, we have received song applications proclaiming their love for Bruno. He is very touched.

As you can imagine, people can’t get enough of Bruno. Just look how adorable he is.

🚨just been sent this video of bruno the thicccat🚨 pic.twitter.com/wsL3caeXLh

Bruno hasn’t been adopted just yet, but he’s “reviewing applications” as we speak.

Fame has gone to his head. Our thicc boi Bruno is now reviewing applications for the *PERFECT* home. pic.twitter.com/NmVjAufJcw

Whoever is selected to give Bruno all the love, treats, and cuddles this Very Good Boy deserves will be one lucky pet parent indeed. Just don’t forget to follow his rules.