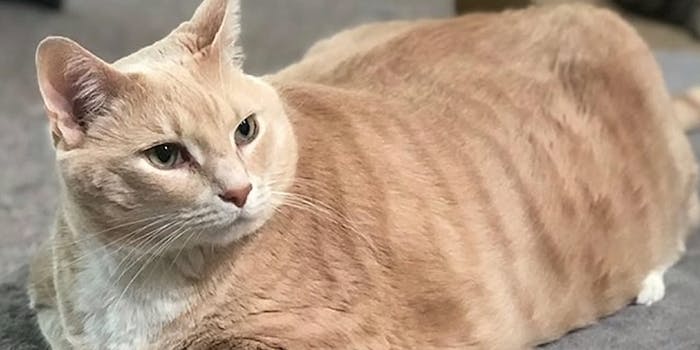 Meet Bronson, the colossal cat with his own personal trainers

He’s a 3-year-old feline who has a lot of love to give. There are loads of it in his rotund body, as the cuddly feline weighs more than 30 pounds. He’s a lot of cat to handle, but one Michigan couple knew he was just the cat for them.

Mike Wilson and girlfriend Megan stopped in at the Humane Society of West Michigan to look for a loving kitten to take home, but their hearts melted when they met Bronson. Whose wouldn’t?

In an interview with Love Meow, Wilson said when they saw Bronson in all his glory, they “started falling for him.”

Bronson had only come to the shelter three months prior. His owner had passed away, and unfortunately he was massively overweight. The animal shelter naturally wanted to make sure the cat was going to go to a good home with new pet parents who would help him get down to a healthy weight.

As the happy couple got to know Bronson more, they knew he was the cat for them. Everything fell into place quickly, with the couple adopting Bronson and putting him on the path to wellness so he can slim down and enjoy life with his human companions for years to come.

The couple opened up a special Instagram page for Bronson where they could document his fitness journey, which began back in April.

Obviously, people can’t get enough of cuddly ol’ Bronson, as he’s made something of a splash on social media.

He’s just a regular cat, but there’s more of him to cuddle up with!

He's so cute and those thumbs

The best news? Bronson has lost a few pounds after starting his new health regimen, and he’s down to 31.3 pounds. We’re rooting for you, Bronson.

I asked Bronson if I could get a corner of that pillow and he told me to beat it. #goodnight #pillowhog

We’ve been struggling with how to pick up Bronson without feeling like we’re hurting him. If feels like his organs are getting pushed together or something when we do it. We need to carry him out of bed or else he sleeps all day. Today we’ve invented the Transportation Pillow. It worked way better than planned and Bronson felt like a god.