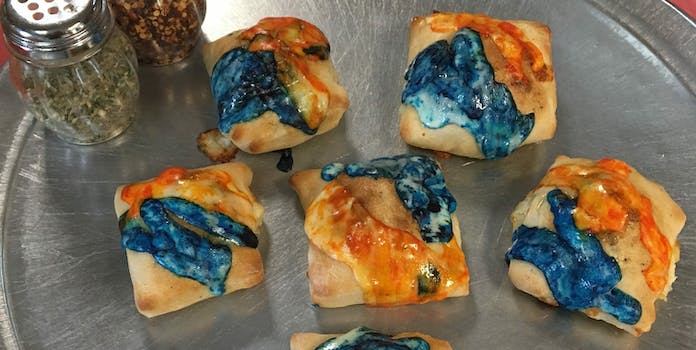 A Brooklyn pizzeria has decided that if kids are going to eat Tide Pods, they might as well be eating ones that are healthy—or at least not toxic.

Sean Berthiaume, co-owner of Vinnie’s Pizzeria in New York City, created a mini calzone that resembles the laundry detergent product that, for some reason, people have decided to start eating.

Introducing: PIEd Pods. Listen. We're concerned about the youths. They're eating laundry detergent pods. Our Pied Pods (filled w/cheese and roni) have that bright, alluring colors that youths crave BUT are 100% edible and 100% not soap. Plus they're delicious. #vinniesbrooklyn pic.twitter.com/ck4eni31VX

For the record, Tide Pods are poisonous and potentially lethal, so DO NOT eat (or for the love of god, vape) them. They contain things like dioxane and polyvinyl alcohol, which can damage your lungs and kidneys.

The Daily Dot spoke to pizzeria owner Berthiaume over the phone. He told us his “pied pods” contain mozzarella, pepperoni, ricotta, Italian spices, and some orange and blue food coloring. While that may not be great for your arteries, they’re still way better—and no doubt tastier—than eating laundry detergent.

“Our Pied Pods (filled w/cheese and roni) have that bright, alluring colors that youths crave ” The restaurant said in a tweet promoting their new product, “BUT are 100% edible and 100% not soap. Plus they’re delicious.”

Vinnie’s has a long history of pun-themed menu options. Berthiaume has been creating specials on the restaurant’s dry erase board since 2010 (which, for the record, is the year before Bob’s Burgers premiered on Fox) and has featured tributes to pop culture topics like Star Wars and the celebrities we lost in 2017.

To all of those we lost in 2017, we tried to honor you the best we could. REST IN PIZZA. Here's to a new year when no one will die, the world will get infinitely better and everything will be fine all the time. Well, we'll still be serving delicious pizza at least. #vinniesbrooklyn #restinpizza #rip2017 #2017 #pizza #happynewyear

Berthiaume isn’t actually the first to create an edible version of a Tide POD, but this is the first we’ve heard of a savory version and likely the first time an actual restaurant has added it to the menu. So if you’re in Brooklyn right now, and you’re hungrily staring at your laundry detergent, consider stopping by Vinnie’s instead.