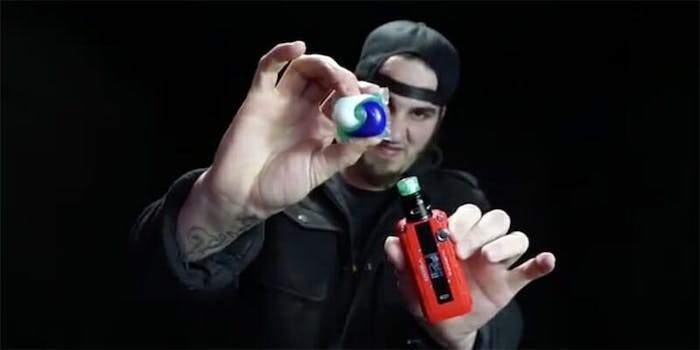 Welp, someone vaped a Tide Pod

Someone just took the Tide Pod phenomenon to a new level of stupid. Hint: It involves a vape.

Smoking, as you might have heard, is not good for you. Luckily, someone invented vaping so you could at least look like a total idiot while doing it. What you might not of heard is that eating laundry detergent is also bad for you. You probably didn’t hear this because it seems like the kind of thing you shouldn’t have to tell people, and yet Tide teamed up with New England Patriot’s tight end Rob Gronkowski to say exactly that.

What should Tide PODs be used for? DOING LAUNDRY. Nothing else.

Eating a Tide POD is a BAD IDEA, and we asked our friend @robgronkowski to help explain. pic.twitter.com/0JnFdhnsWZ

It seems that some people have, in fact, been eating Tide Pods. It started out as a joke but, in the way of the internet, turned into a challenge.

In these people’s defense, the word “challenge” left them with very little choice. They had to eat laundry detergent—or else no one would know how cool, stupid, or desperate for attention they were.

Now a true hero has risen from their ranks. This is a man who realized that if two moronic activities are great, combining them would be the greatest thing of all. So he decided to vape a Tide Pod.

The video comes from an Instagram account called @vapetricks, which features other super cool tricks like hitting three vapes at once or vaping with a big plastic dome over your head.

The account is run by a company called Voopootech, which despite having the word “poo” in its name probably makes a fine healthy product that you should definitely put in your body. After all, it most certainly has your best interest at heart.