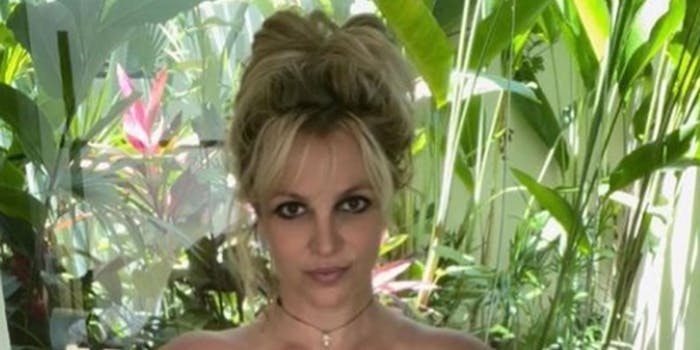 ‘Sexualizing her for her entire life and then shaming her the moment she has the power to consent and control it’: Britney Spears photos spark backlash

'Why should anyone care about her selfies?'

Social media is in an uproar after celebrity news site TMZ presented the argument that it was a “bad idea” for Spears’ conservatorship to be ended in response to Britney Spears posting nude photographs.

After nearly 14 years under a conservatorship controlling her financial assets, career choices, public appearances, and personal life, Spears’ conservatorship ended in November. The announcement was met with widespread joy from activists and supporters of the #FreeBritney movement.

Since the termination of the conservatorship, Spears has begun posting a variety of new content on her Instagram, including some mostly nude photographs. And today, after the release of a few new photographs from Spears, TMZ sparked backlash after releasing an article titled “NUDE PICS HAVE FANS SPLIT…Concern Or Celebration?”

“Britney Spears’ latest round of nude pics have folks squaring off … some say it’s a symbol of Britney celebrating her freedom, while others say it’s a sign ending the conservatorship may have been a bad idea,” TMZ tweeted about the article.

In response to the tweet, TMZ is now facing criticism for amplifying sexist opinions.

“Sexualizing her for her entire life and then shaming her the moment she has the power to consent and control it,” ACLU communications strategist Gillian Branstetter tweeted at TMZ. (Disclosure: Bransetter has previously written for the Daily Dot.)

Some users called out TMZ for taking a “both sides” stance on the story.

“Woman posts *scandalous* pictures on the internet… should she be allowed to have a bank account? lets discuss!” someone replied.

“I didn’t know getting naked was a reason to strip someone of their civil and constitutional rights. I can’t believe that at this point some people don’t understand what a conservatorship really is,” another user tweeted.

Others accused TMZ of taking part in inappropriate media coverage of Spears’ case.

“Right? She’s an adult, and other people have been sharing invasive pics of her for decades. Why should anyone care about her selfies?” another user responded.

Despite countless people debating Spears’ photographs on social media, Spears said on Instagram she has been using her photographs to express herself after being freed from her conservatorship.

“A lot of you who say I should be cautious with what I post … I mean if you REALLY THINK ABOUT IT … with what I’ve been through I believe I been WAAAY TOO CAUTIOUS !!!! One day I will live on the edge !!!” Spears captioned a post.

The Daily Dot reached out to representatives for Spears listed on her IMDb Pro page, and TMZ via its website contact form.