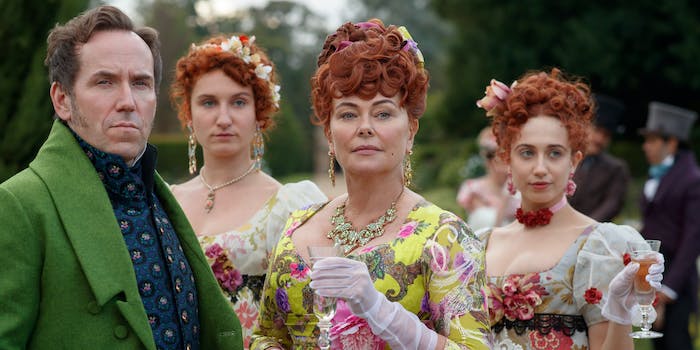 It was something the cast talked about during their fittings.

Bridgerton, even with its Regency England setting, takes many of its cues from today—from its commentary on the era that it’s depicting to those musical cues. But according to one of the show’s stars, it also used one of the U.S.’s most famous families as an influence for a prominent Bridgerton household.

Although the series from famed producer Shonda Rhimes first debuted at the end of December, it took Kim Kardashian some time before she jumped aboard the Bridgerton train. Toward the end of March, Kardashian chronicled her journey watching the series in a series of Instagram Stories. When Netflix revealed that breakout star Regé-Jean Page wouldn’t return for Bridgerton’s second season, she was just as upset as anyone.

Word of Kardashian’s love of Bridgerton eventually got to Nicola Coughlan, who portrays Penelope Featherington on the show. And earlier this week, Coughlan took to Twitter to reveal that the Featheringtons—matriarch Portia, elder sisters Philipa and Prudence, and young Penelope—were influenced by the Kardashians.

While there’s no question who matched up to the ever-scheming Portia (Kris Jenner, obviously), fans took to trying to match the Featherington sisters to the Kardashian sisters. When someone suggested that Penelope was Khloé, Coughlan offered a different viewpoint.

To her, Penelope might actually be the Kim of the family based on the camaraderie of Philipa and Prudence compared to Kourtney and Khloé, Kim’s business skills, and even the latter’s detective work.

When Coughlan’s tweet ended up in Kardashian’s Bridgerton group text, she was thrilled and asked to visit the Bridgerton set for her own costume fitting. Coughlan also revealed another connection between the Kardashians and the Featheringtons: Their corset was made by the same designer.

While Netflix’s social media account offered to make Kardashian an honorary Featherington, noting that “Kim Featherington does have a nice ring to it,” Coughlan went in a different direction by making her her own duchess. And given that Penelope is the woman behind one of the ton’s most influential entities, Lady Whistledown’s gossip columns, she might have some sway.

“I will wear this title proudly and not let you down Lady Whistledown!” Kardashian replied.