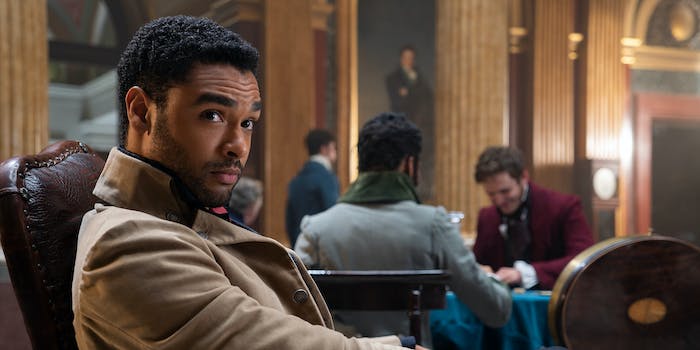 His exit is built into the very fabric of many romance novels.

Bridgerton became a bonafide hit after its debut over the past few months to become Netflix’s most popular show yet, but as season 2 moves forward, it will be doing so without its breakout star.

On Friday, Netflix and Shondaland announced that Regé-Jean Page, who was at the center of Bridgerton’s first season as Simon Basset, the Duke of Hastings, will not be returning in season 2. Bridgerton’s social media accounts shared a note “written” by Bridgerton’s official gossip columnist, Lady Whistledown.

While all eyes turn to Lord Anthony Bridgerton’s quest to find a Viscountess, we bid adieu to Regé-Jean Page, who so triumphantly played the Duke of Hastings. We’ll miss Simon’s presence onscreen, but he will always be part of the Bridgerton family. Daphne will remain a devoted wife and sister, helping her brother navigate the upcoming social season and what it has to offer—more intrigue and romance than my readers may be able to bear.

Among Bridgerton’s vast ensemble cast, Page was the clear breakout star. While Bridgerton wasn’t his first role (he’s also appeared in For The People, Sylvie’s Love, and the Roots remake in recent years), it’s the one that made him a household name. In the months since the show’s debut, Page was cast in The Gray Man (a spy thriller from the Russo Brothers) and Paramount’s Dungeons and Dragons movie, and he even got to host Saturday Night Live to promote a show that came out months ago. And like any young British star who makes a big splash with a meaty role, he’s already got James Bond casting rumors swirling around him.

According to Page himself, Simon’s role on the show was one that came with an end date.

“It’s a one-season arc. It’s going to have a beginning, middle, end – give us a year,” Page told Variety, noting that romance fans are prepared for this kind of exit. “[I thought] ‘That’s interesting,’ because then it felt like a limited series. I get to come in, I get to contribute my bit and then the Bridgerton family rolls on.”

What will Bridgerton season 2 look like without Page? Despite fans’ worries, it won’t be the end of the world.

We’re light on details on season 2 apart from the basics. We know that season 2 will adapt The Viscount Who Loved Me, the second book in Julia Quinn’s Bridgerton series, which focuses on eldest sibling Anthony’s search for love; the casting so far reflects that with Netflix announcing that Simone Ashley has been cast Kate Sharma (Sheffield in the books) and Charithra Chandran will portray Kate’s younger sister Edwina. (Rupert Young has also been cast in a role created for the show.) And season 2 is set to deliver another epic love story to give Anthony his happily ever after (HEA), the kind that embraces some of romance’s most popular tropes.

But The Viscount Who Loved Me is very light on actual material for Simon. He doesn’t show up until much of the ton travels to Aubrey Hall, the Bridgerton family’s country home, and he’s introduced to Kate during a game of Pall Mall. He’s pleasant and polite to Kate (who’s meeting him for the first time), and according to her observations, “it was clear he adored [his wife Daphne] to distraction.” There are no hints of any conflict between Simon and Daphne (Phoebe Dynevor)—or Simon with his in-laws—and per the main viewpoint characters of The Viscount Who Loved Me, Anthony and Kate, they are nothing short of in love with one another.

In many romance series, this kind of character shift is quite common. The first book will focus on one couple. Once they achieve their HEA by the book’s end, the next book will focus on another couple, which usually involves at least one supporting character from the previous book. Sometimes, that first couple might make a cameo appearance to give us an update on their lives or to show us that they’re still happy. While it’s always great to see them again, it doesn’t necessarily make for interesting drama. Trying to create a way for Simon to remain in the narrative might feel hamfisted and contrived (and might not even work), whereas it makes more narrative sense to keep Daphne in the loop.

Think of it more as a connected anthology series that takes place in the same world (Regency-era England) but will feature a new couple with each new season with a few characters like Bridgerton matriarch Lady Violet (Ruth Gemmell) tying them all together.

The Bridgerton books—which spans eight books, one for each Bridgerton sibling—follow that format. Daphne’s story mostly finished once she and Simon got their HEA, and by the end of The Viscount Who Loved Me, that happens with Anthony. If a third season follows suit with the second, that one will likely be centered around Benedict Bridgerton (Luke Thompson), who is one of the main protagonists of An Offer From a Gentleman. In the books, even Lady Whistledown doesn’t stick around forever.

Does that mean that Page’s Simon Basset will never show up in Bridgerton again? Never say never. But with Page’s rising star and the nature of storytelling, Bridgerton’s very nature gives him the flexibility to pop in or out of the narrative in ways that also assure us that even if we’re not seeing the Duke and Duchess of Hastings, they’re both doing alright.