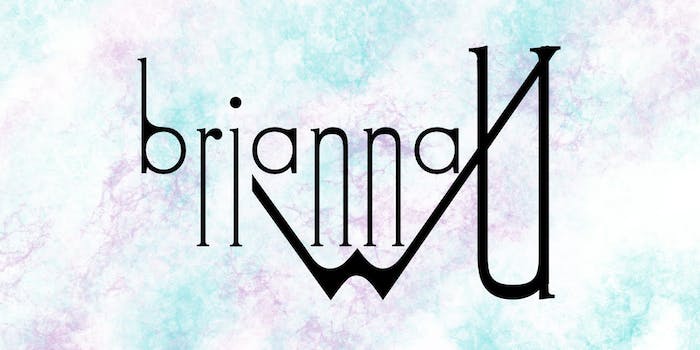 They're saying it looks like she's starting a metal band.

Brianna Wu, the game developer and activist who is now running for Congress, unveiled a potential new logo Wednesday. To say the internet is roasting it is a tremendous understatement. A design hasn’t been this creatively, viciously critiqued since Under Armour released the much-maligned Curry 2 Low ‘Chef Curry’ shoe nearly a year ago.

And here’s what people are saying about it:

LMFAO fitting that Brianna Wu will use a log fit for a 70s acrid rock band in her bid to be congressperson for the moon pic.twitter.com/BSqvbwSRY4

when does brianna wu's logo get added to @metalband_exe

The savage roast-a-thon seems to have begun when Zack Parsons, a Something Awful writer and centerpiece of Weird Twitter, retweeted the logo:

The sick burns aren’t coming from Gamergaters, the group of misogynistic gamers and 4chan denizens that’s been harassing and threatening Wu since she stood up to them in 2014. They’re mostly coming from the segment of Weird Twitter that’s best equipped to spend dozens of tweets comedically trashing a design on aesthetic grounds.

It’s reminiscent of the time Something Awful veterans Jon “Fart” Hendren and David “Arr” Thorpe got into a Twitter feud over Hendren’s monumentally ugly sneakers. The Comedy Roast of Fart’s Shoes went on in earnest for eight months and is still occasionally revived when someone remembers how funny it was.

Well, Wu’s logo is now getting the same treatment as those hideous leopard-print Vans. It’s what Twitter does best.

I can't believe this is going to be Brianna Wu's official campaign logo pic.twitter.com/ETI0PePREM

And they’re not letting up:

Designed a better logo for Brianna Wu. The backwards-facing R represents the lessons we've learned from the past. pic.twitter.com/lxLL8b0Dqu

i'm sorry this is actually fucking killing me pic.twitter.com/IO928SQTAL

Wu hasn’t commented on the buzz around her potential logo, but she did delete the tweet Wednesday afternoon. She also posted this reply to someone who gently suggested it could be more legible:

The odds of using it are very low for that reason.

It’s not a total waste if she doesn’t use it. A whole bunch of clowns on Twitter already have.