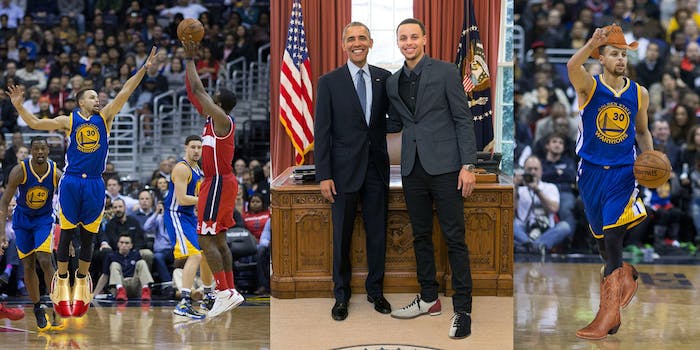 Unanimous NBA MVP Steph Curry has been pretty lackluster in the finals. Given the Golden State Warriors‘ unwavering dominance and record-setting season, it’s a bit surprising to see him sputter and falter in this critical match-up.

Turns out some seriously shitty footwear may be to blame—the kind of shoes that make you want to drill out all your tennis balls and start stockpiling walkers or learn how to install a new garage door opener.

Shoe enthusiasts over at Sneakernews have rated the bland chefs a paltry 2.6 out of 5. And Twitter has had a field day roasting these kicks to a crisp.

THE "PROSTATE EXAM" 7'S ARE LIMITED RELEASE & U *MUST* SIGN UP FOR THE LOTTERY VIA YOUR AARP APP. GOOD LUCK! pic.twitter.com/RJVAB5MKZs

Dad jokes are plentiful, given a father’s desire for comfort, zero style, and the utmost embarrassment of their child.

"How Do I Get Songs off My Zune" 5s pic.twitter.com/xtpOSpmG0A

I tweet for washed men who laugh @ the chef lows but would get em on clearance & wear em to their son's tball game pic.twitter.com/lanFhWJSTH

Perhaps Under Armour is eying that sweet Father’s Day cash. Maybe Curry is just that unfashionable. Riley is probably already having nightmares about these lows, begging her mom to make their $3.2 million house a shoeless palace.

For the love of your child, your fans, and the game, please take off the early bird specials, Curry. At least until the finals are over.