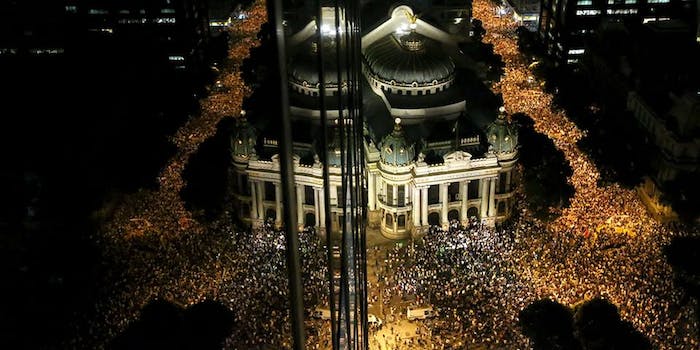 The most amazing GIF to come out of the Brazil riots

When faced with a can of tear gas, the natural reaction for most protesters is to run and hide, face covered. That’s unless you’re a Brazilian steeped in a long history of soccer excellence.

Over the past two weeks, the largest cities in Brazil have been overrun by the “biggest protests in 20 years” over “poor public services, police violence and government corruption,” Reuters reported. In Sao Paulo alone, more than 65,000 people marched Monday. Brazil is currently hosting the FIFA Confederation Cup, a soccer tournament leading up to the World Cup. The tournament has been a source of pride for Brazilian politicians hoping to show how their country can handle large events while everyday citizens believe the money used to build and keep up the stadiums should have instead been spent on the people.

“My Brazilian girlfriend tells me that the raising of the bus/subway fare by [20] cents was the tipping point,” Reddit user el_firjol commented. “The minimum wage in Brazil is terrible, and yet government officials create fake positions to give out government money to friends.”

As has been the case since the Arab Spring, the Brazilian protests have been playing out across social media. On YouTube, you’ll find dozens of professional and amateur videos of protesters clashing with police. On Twitter, the hashtag #foradilma, Portuguese for “out [Brazilian President] Dilma [Rousseff],” is a rallying cry. And on the social news site Reddit, a GIF of a protester kicking back a canister of tear gas has given Brazilians hope.

“[A]s a Brazilian having a terrible day, this genuinely made me laugh, thank you,” sharperzerocool commented.

The GIF has collected more than 450 comments since Monday and has hovered around the top of Reddit’s r/GIFs community since then.