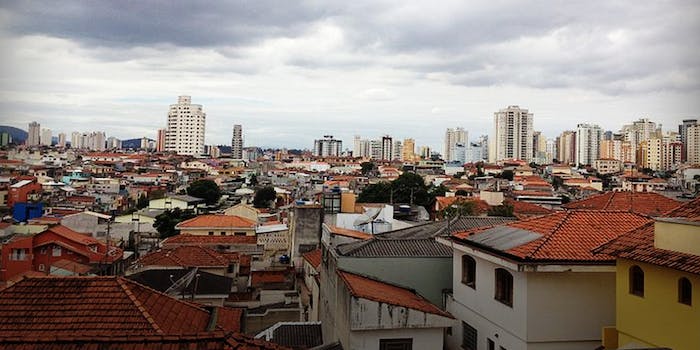 Brazilian kids gathering at malls wasn't a political event until police got involved.

Groups of urban youth in São Paulo, Brazil have gained the media’s attention after a series of flash mobs, called “rolezinhos.” The events involve large groups of teenagers taking over public property, usually a mall. There’s frequently music, dancing and even costumes.

Like all flash mobs, rolezinhos appear impromptu and take place amid an audience of shocked consumers and other pedestrians. The events are started on social media, typically when someone attracts enough attention to a Facebook event page. Half-party and half-spectacle, rolezinhos aren’t organized explicitly to be political, but that hasn’t stopped the international press from placing them in the context of society’s larger problems.

A rolezinho at Shopping Metrô Itaquera in São Paulo drew an estimated crowd of 3,000. Military police responded to that event with tear gas and rubber bullets. Two participants were arrested and police reported an incident of theft. A spokesperson for Itaquera said the mall has no record of it.

After the Itaquera event took place, Geraldo Alckmin, the governor of São Paulo, ordered an investigation of the police tactics. Likewise, other officials have taken into consideration the size of recent protests and urged the authorities to refrain from applying too much force, according to the New York Times. An aide to President Dilma Rousseff told reporters, “I don’t think repression is the best way forward, because everything done along that line is like throwing gasoline into the fire.”

Rolezinhos were planned at other São Paulo malls, such as Shopping JK Iguatemi and Shopping Campo Limpo, but the owners were granted court orders to ban the youth. One group, the Homeless Workers Movement, was turned away by guards. Organizers called the mall’s actions a “revolting” act of prejudice. Some of the participants held their cash and bank cards up in the air in protest.

Many taking part in the rolezinhos are black and from poor areas, which has led to accusations of police racism. On Facebook, a photo of dark-skinned youth at a mall being inspected by police was compared to an illustration of British slave traders in Cuba.

Naturally, rolezinhos are being widely discussed by the media and academics who have examined the phenomenon through a variety of different lenses. While some have warned against attributing dissent to the gatherings, noting this is also about a love for consumerism, others describe the youth’s actions by adding an economic pretext—rolezinhos are predominantly attended by the lower class and because of that, high society is responding to their presence negatively, if not brutally.

One 17-year-old, attending a rolezinho broken up by the police, told the Economist he was there to hang out and meet girls. At a mall closed down in anticipation of one of the events, only 50 kids showed up. They set up a grill in the parking lot and listened to funk music.

No matter the origin, there are people specifically attending the rolezinhos because of the conversation they’ve caused. On an event page for an upcoming rolezinho, one person, who supports the establishment of a national movement, said the violent response to the rolezinhos is exactly why they should continue.

The question now is whether the government’s reaction will inadvertently transform the escapades of a few thousand youth into a full-fledged movement for the economic and racial equality of all Brazilians.