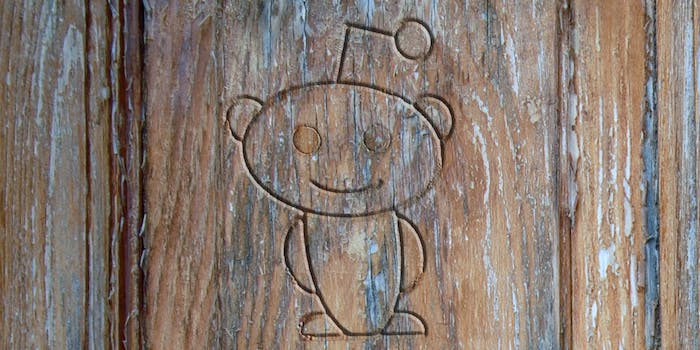 The ban of r/n****rs has sympathizers claiming none of Reddit's Five Rules were actually broken. Should this matter? Does racism belong on Reddit?

In recent weeks Reddit has found itself once again amid controversy, after banning the racist forum, subreddit r/n****rs. The forum was filled with just about what you’d expect from its name: “scientific” studies about African IQs; news articles about black-on-white crime; odes to George Zimmerman. The official reasoning given for banning r/n****rs, as provided by Reddit Community Manager Marta Gossage, was “a long line of moderator offenses punctuated by threats/incitements of violence.”

Reddit does have some basic rules in place that are meant to circumvent this kind of controversy, but they’re often perceived as “playing favorites” in enforcing some more than others. As the Daily Dot’s own Fidel Martinez points out, “Reddit’s unwillingness to provide much information is largely the reason why, among some redditors, the site has a reputation of playing favorites.” While each subreddit tends to come with a litany of its own specialized rules, Reddit’s own administrative rules are broken down into five main points: No spamming, no personal information, no vote manipulation, no child pornography, and no hacking. 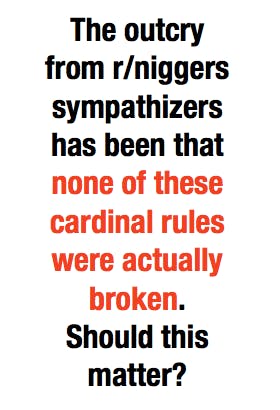 The fact that this ban was due to “threats/incitements of violence,” is considered questionable by some, in the case of r/n****rs: ChuckSpears (moderator of r/n****rs and other “white power” subs) had posted an image of a gun aimed at a Post-It that read, “I’M READY R/N****RS.” It could be that Reddit administrators had finally gotten somewhat touchy and/or, frankly, sick of the attitudes received from these subreddits and deleted them. But the outcry from many r/n****rs sympathizers has been that none of these cardinal rules were actually broken, and that it represents blatant limitations of free speech. Should this matter? We don’t like that the KKK exists, but we tolerate them (and their national convention, and parades) because we live in a democracy that values free speech.

Does Reddit need to be concerned with preserving free speech, no matter what the content, if it doesn’t violate those basic principles?

To not put too fine a point on it, the answer, of course, is no. Reddit is a private publication owned by Conde Nast, a major publishing house. Having your racist subreddit banned is functionally no different than the New Yorker (a Conde Nast publication) rejecting similar literature. The only difference is that Reddit is an inherently democratic culture. So if even a hefty minority of redditors found the content of r/n****rsor r/WhiteRights worth their time, it would easily find itself on the front page. Concerns about the ban have to do with the worry that Reddit is possibly making a move against its core democratic nature—against its raison d’etre. Yet this is exactly where Reddit is not only right to ban r/n****rsbut perhaps must do so in the interest of survival of the site itself.

Hate groups online, of course, isn’t anything new. They have used Facebook and Twitter for recruiting and soap-boxing since the inception of those sites. Just last month, Facebook closed down 40 anti-Islam groups; this past spring they shut down fan pages devoted to Boston bomber Dzhokhar Tsarnaev. Twitter is actually less controlling in its response to online hate groups; the Simon Weisenthal Foundation found Twitter above all other social media sites has furthered the growth of hate groups. 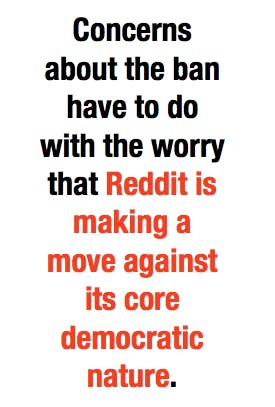 But while those sites have (perhaps) a larger audience, there is one important distinguishing factor often skipped over: anonymity. While fake accounts can be, and are, made by the dozen on Twitter, both Twitter and Facebook do use personal information as their bread-and-butter. Reddit, meanwhile, explicitly bans the posting of identifiable personal information. This encourages those judging Reddit to see it as a single entity rather than a conglomeration of individuals. In this context, a hate group gaining any manner of popularity presents less a publicity crisis and more of an identity crisis.

So the question remains: Do Reddit’s Five Rules allow for hate groups? They don’t mention racism, or, for that matter, even the “threats/incitements of violence” given as a reason to ban r/n****rs. The supposed “moderator offenses” committed in r/n****rsare unpublicized by Reddit, and therefore arming r/WhiteRights (which is still operational) with more justification for their pity party.

Rn****rs.com was quickly set up to replace r/n****rson Reddit. The website and forum is offensive to even the most tolerant mind: “67 shot in Chimpcago over 4th of July weekend, article doesn’t mention race”, “Man in wheelchair beat by 4 niggers in home invasion”, “TIL – N****rs invented the Super Soaker” and so on. The most prominent White Power board left on Reddit, r/WhiteRights, is similar in tone. So why delete r/n****rs but leave r/White_Pride, r/WhiteNationalism, or r/StopWhiteGenocide? 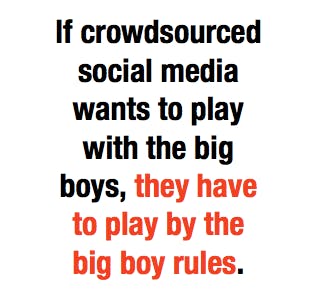 This brings us back to ChuckSpears.

ChuckSpears’ posting history shows him to be a less-than-favorable character, and not simply due to his racist ideology. While he regularly throws around racist speech and seems to hunt down black people on Reddit to gode and troll (often telling them to go to “an all-black utopia, like Deathtroit, Chimpcago, Apelanta, Nig Orleans, Memfrica, Ookland, St. Loot-us, or Killadelphia?”), he also is blatantly hypocritical. In a more fair-minded race-related sub, r/racialdiscussions, he commented in a tirade, “To be clear: the content of /r/n****ers (hereafter referred to as The Subreddit) was disturbing and wrong on many levels. I am not defending it.” He goes on to say the chief reasoning for r/niggers’ removal is due to claims of “brigading,” or organizing mass downvote campaigns.

If we are to believe ChuckSpears, then the cardinal law broken is actually corrupting the voting system—a system for which Reddit fights every day for the integrity of. Which begs the question: Why wouldn’t Reddit administrators provide the evidence for that corruption? And, moreover, claim that ground, rather than incitement to violence? 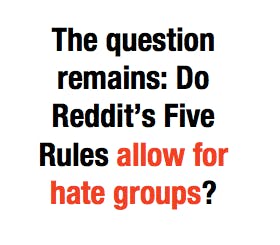 The easiest answer is they don’t have to. As Gossage said (under the username bitcrunch), “if we [gave proof] people would just find ways around our detection system…We aim to operate with a content-agnostic approach, and act on the same criteria, whether the community is sweet and fluffy or controversial and prickly.” Very few would bother defending the rights of an online hate group that regularly makes violent threats and lionizes American Nazi Party founder George Lincoln Rockwell, but Reddit and its administrators seem to care about nothing more than by-the-letter justice.

In other words, the reasoning for r/niggers ban is basically self-evident. Reddit does not simply have an image to maintain, but the image of its users. If they wish to survive as a BuzzFeed-friendly source of Internet miscellanea and a repository of all things both “fluffy” and “prickly,” they can’t allow racist groups to be successful in rigging their voting system—or to even gain popularity for their causes by sheer propaganda. Look at Tumblr, the toybox of Internet porn, which just banned all NSFW content. This is a concerted move by Tumblr and its new owner Yahoo to bring in the microblogging service from the fringes of society. Reddit has the same interests (although they allow plenty of NSFW content).

The users of these sites are clinging to their wild west past, and perhaps they rightfully should. But if crowdsourced social media wants to play with the big boys, they have to play by the big boy rules. Play nice. Hands to yourself. Share.

Ben Branstetter is a writer and blogger living in Central Pennsylvania. He attended the Milton Hershey School and studied Secondary Education at Penn State University. His work has been published in Thought Catalog, yhe Useless Critic, God of Lamb, and he has appeared on HuffPo Live. He can be reached at www.benbranstetter.com and found on Twitter @BenBranstetter.