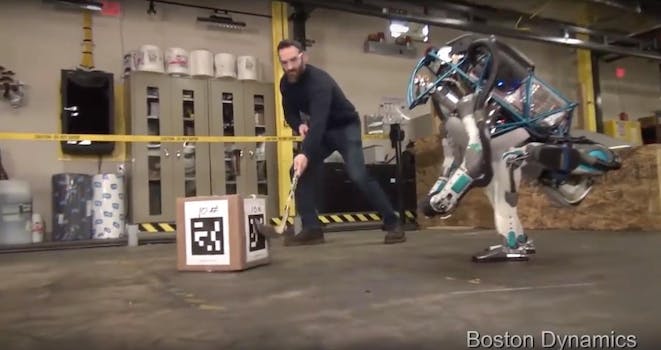 Terrifying Boston Dynamics robots get the parody they deserve

Their robots are literally meme machines.

Robotics company Boston Dynamics released a new video of their humanoid robot, Atlas, accomplishing a series of feats like lifting a 10-pound box and getting up after being knocked flat on its face.

Atlas is the latest in a long line of terrifying robots that may be leading the awkward, stilted robo-march toward the technological singularity. They’re incredibly sophisticated, complex, and hilarious, thanks to a couple of parody videos.

In Boston Dynamics’ original video, we watch Atlas put up with the daily drudgery of putting up with the usual bullshit at work without complaint. But YouTuber Michael Leip decided to give Atlas a voice that we can all relate to.

Another YouTuber, using the Twitter hashtag #RobotLivesMatter, spliced together a bunch of Boston Dynamics footage and played Sarah McLaughlin’s famous plea for support for the ASPCA over top.

But a few people see more dire consequences if this robot abuse continues.