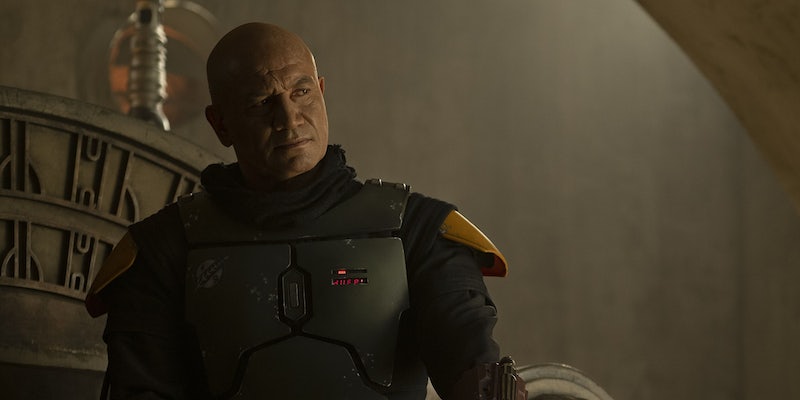 ‘The Book of Boba Fett’ episode 3: Is Boba Fett bad at his job?

This recap includes spoilers for The Book of Boba Fett episode 3.

By focusing on Boba Fett’s new duties as a crime boss, episode 3 doubles down on the show’s most amusing problem: On Disney+, Boba isn’t allowed to be bad.

We begin once again with a supplicant visiting Boba Fett in his new throne room. Attempting to leverage Boba’s ego as a newbie crime lord (“With apologies, sir… No one respects you!), a local water-monger asks him to deal with a conflict in his neighborhood. Apparently a bunch of “kids” stole some of his water.

When Boba investigates, the kids turn out to be a stylish gang of college-age cyberpunks. They accuse the water-monger of selling water at exorbitant prices, making it clear who the real bad guy is. Boba promptly hires the gang as his new enforcers, which turns out to be a smart move because they soon foil an assassination attempt from the Wookiee bounty hunter Black Krrsantan.

In this week’s flashback, we learn that Boba’s Tusken friends were killed in a turf war between Tatooine’s criminal gangs, suggesting a potential motive for Boba’s new career as a crime boss. Maybe he installed himself in Jabba’s palace because he wants to clean the place up, preventing further senseless deaths. This would track with his PG-rated behavior, where he repeatedly refuses to kill anyone or behave like a real gangster. He’s unrecognizable as the amoral bounty hunter of The Empire Strikes Back, seemingly naive about the ruthlessness required to run a criminal empire.

There’s nothing wrong with Star Wars spinoffs having a kid-friendly tone—it’s a family franchise!—but this is a weird fit for Boba himself. The show’s premise is rooted in nostalgia for older Star Wars fans, the prime audience for Boba Fett as a gritty antihero. But Jon Favreau’s interpretation of his personality is toothless and confused. The same story would work better with Boba as a “clean up Tatooine by any means necessary” anarchist figure, but instead, he just sits around and waits for people to tell him things.

In episode 3’s opening scenes, I found myself agreeing with that corrupt water-monger. It is hard to respect Boba Fett as Jabba’s replacement! He’s bad at his job! He’s neither enjoying his power as a bad guy nor proving very effective as a hero. That’s a particularly galling problem in the context of this episode’s director, Robert Rodriguez. He’s known for directing gritty action/crime thrillers (Once Upon a Time in Mexico) and fun adventure movies for children (Spy Kids), but none of that is really visible here, diluted by the slow-paced brand of Disney+’s Star Wars shows.

The one visible sign of Rodriguez’s involvement is a fun little cameo from Danny Trejo, delivering a trained rancor as a gift from the Hutts. “Rancors are emotionally complex creatures,” he tells Boba, explaining that when he removes the rancor’s blinkers, it will immediately imprint upon the first person it sees. Boba is enraptured by his new pet, but one can’t help but recall that other people share his face. What if the rancor meets one of Jango Fett’s surviving clones? Will it take orders from him too?