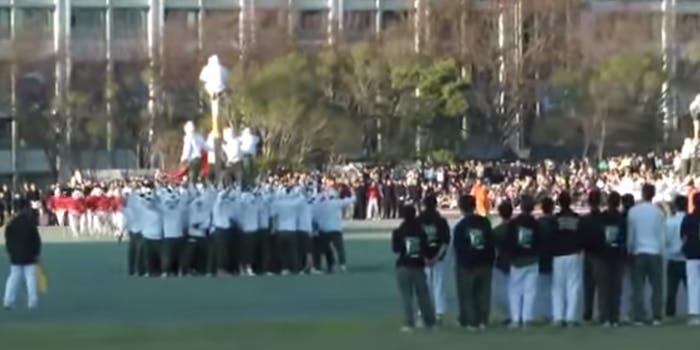 Your guide to Bo-Taoshi, the most intense sport you’ll never see on ESPN

Part capture the flag and part World War Z, you need to see this to believe it.

Sometimes a YouTube video will make me ask, “What the heck am I watching?” And sometimes it’ll make me want to storm a castle. This video of the Japanese sport Bo-taoshi accomplished both.

The game is played by two teams of 150 players each—75 attackers and 75 defenders. The defenders raise their team’s pole and start in a defensive formation around it. Attackers then rush the pole and try to pull it down. The goal of the game is to pull the opposing teams pole down to a 30-degree angle before the other team can accomplish this feat.

Defenders form a barrier around the pole and push and shove away the attackers who are using each other’s backs as springboards to leap up for the pole. The man at the top of the pole (and the one jumping on attackers’ faces like Mario on a koopa troopa) is called the ninja, and his job is to lean the pole to the opposite side and counteract the weight of the pulling attackers.

The important takeaway from all of this is that there’s a sport in Japan that features ninjas. How much cooler would a sport like baseball be if instead of outfielders we called them ninjas? “It’s back to the warning track, it has a shot Jim. Ohh! And the ninja snatches another one!”

It probably wouldn’t be allowed under the current collective bargaining agreement, but if we could find a way to mix in the occasional stealth assassination and smoke bomb exits on strikeouts, it’d be that much more awesome.