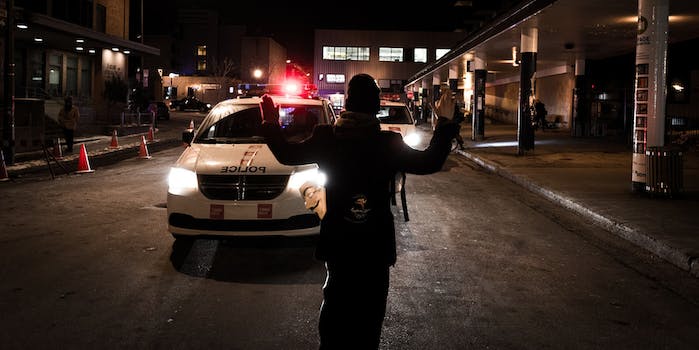 Why #BlackLivesMatter is nothing like the ALS ice bucket challenge

It's unfair to compare a nationwide social movement for lasting change to a charity stunt.

As the nationwide movement fighting for justice for unarmed black men gunned down by police fades from the news cycle, there is a real concern this salient issue in American culture will become yet another slacktivist fad like the ALS Ice Bucket Challenge that spread like fire this past summer. As “Black Lives Matter” is endorsed by celebrities and athletes, The New Republic’s Theodore Johnson writes that “its mission is at risk of losing intensity.”

“‘I Can’t Breathe’ is not a promotional tool. ‘Black Lives Matter’ is not a motto. ‘Hands Up, Don’t Shoot’ is not an advertising catchphrase,” Johnson says about the phrases’ growing ubiquity. “It’s a truism of civil disobedience that sometimes quantity is a more persuasive argument than reason. But the most important characteristic is always purity of conviction.”

Which is true enough, but the argument that endorsements by celebrities and athletes is somehow polluting the movement borders on the absurd. The difference between Black Lives Matter and a fundraising stunt like the Ice Bucket Challenge—which, it should be noted, was wildly successful at its goal of raising money—lies not in how the movement spread but in what each movement is asking.

Unlike the Ice Bucket Challenge, Black Lives Matter is not a fundraising drive; it is a grassroots social movement demanding substantial change, not money. The Ferguson National Response Network—which catalogs and promotes all marches and protest within the movement—has no donation page. The success of Black Lives Matter will be measured in the actions of citizens, law enforcement, and policymakers. Not in the coffers of a nonprofit.

In comparison, the Ice Bucket Challenge was purely a numbers game. Although the ratio of those who posted a video to those who actually donated is questionable, the total fundraising figures are not. The ALS Association, which started the movement, collected over $220 million in donations. In comparison, the ALSA’s total expenditure for 2013 was $29 million. The organization earned seven years worth of funding with a single campaign.

Donation drives are nothing new; the massive scale is what makes the ALSA challenge stand out. Social movements with the gravity and intensity of Black Lives Matter, however, are once in a generation. Millions have marched across the country in the name of the movement, staging die-ins and confronting their own local police.

Even the phrase “Black Lives Matter” did not come from a team of marketers or in a flurry of viral fame. It was developed by three lifetime activists after the death of Trayvon Martin in 2012. Alicia Garza, one of these creators, wants it to be very clear that Black Lives Matter has surpassed the frivolity of a mere hashtag. “We’ve hosted national conference calls focused on issues of critical importance to Black people working hard for the liberation of our people,” she writes. “We’ve connected people across the country working to end the various forms of injustice impacting our people. We’ve created space for the celebration and humanization of Black lives.”

Which sounds an awful lot like a political movement. And just like with any political stance, aligning yourself with the movement has its costs. A major difference between taking a stance on the deaths of Eric Garner or Michael Brown and taking a stance against ALS or Joseph Kony is that the former demands personal commitment. Those NFL and NBA players who’ve worn “I Can’t Breathe” shirts will likely face fines from their respective leagues. If a CEO, athlete, or anyone drops ice on their head for charity, it’s all good fun. Speak the simple truth that black people have a right to justice, and it’s too politically volatile for a sanitized world.

While Johnson only cites statements by celebrities and athletes as evidence for the dilution of the movement, the issue has attracted attention from the seat of power, too. Members of the Congressional Black Caucus used the “Hands Up, Don’t Shoot” stance in speeches and Hillary Clinton, the likely next President of the United States, issued a statement putting her support behind the movement while members of the Congressional Black Caucus took to the floor in “Hands up, don’t shoot” pose. And while we also saw a slew of impressive personalities dump ice on their heads, we’re now seeing the first signs of real change as the LAPD becomes the largest police department in the nation to issue body cameras to their officers.

Despite these obvious signs that Black Lives Matter has surpassed fad status into a real, honest-to-goodness movement, others attempt to decry it as little more than a vogue symbol of feigned social awareness using the same harmful argument Johnson is using. Joel Pollak, writing for conservative news site Breitbart.com, calls Black Lives Matter “a classic social media meme–one whose participants might not understand what they are doing.” He goes on to call “Hands Up, Don’t Shoot” a “media lie…For the trendy, though, the facts do not matter.”

Actor Samuel L. Jackson also tied the movement to the Ice Bucket Challenge by similarly “daring” other celebrities to film themselves singing the refrain “I Can’t Breathe.” While well-intentioned, Jackson may be accidentally embracing the artificial social engineering and guilting that made the ALS campaign so successful—and so brief.

If Black Lives Matter is merely the trend Johnson, Pollak, and Jackson fear it to be, then so is the issue of marriage equality. The gay rights movement has been perhaps the most successful social movement in recent memory, raising the number of states that allow gay marriage from one (Massachusetts) in 2003 to 34 today. Much like Black Lives Matter, the progress of gay marriage cannot be measured in Facebook videos or donation dollars; both issues rely on permanent change within legislatures and courtrooms.

And the gay rights movement never seemed hurt by celebrity endorsements (of which it has received many) or being a trending topic on Twitter. As Nancy Scola wrote back in 2012, popularity on social media only helped to raise awareness for the issue of marriage equality and gave the movement new capabilities to plan and organize—which is precisely what we’ve seen from Black Lives Matter.

The fight for justice in the cases of Michael Brown, Eric Garner, Tamir Rice, and now John Crawford is not the petty machination of proud hipsters looking to appear as conscientiously active as they’d like. Nor is it a fly-by-night obsession of new media. What has grown from these tragedies is something far more concrete than a fundraising stunt—even a very successful one like the ALSA campaign. Comparisons to it damage the integrity of the movement’s core mission and threaten to undermine how seriously our culture takes demands for respect of its citizens.