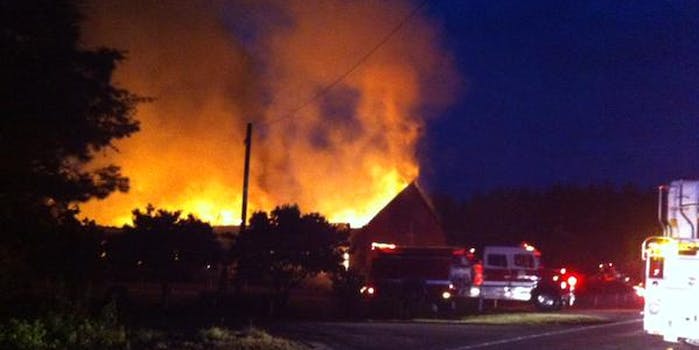 Church was previously burned to the ground 20 years ago this month by KKK.

Barely a day after officials declared that a recent string of fires at black churches throughout the South were not hate crimes, a black church that was previously burned to the ground by the Ku Klux Klan is ablaze Tuesday night in South Carolina.

Here is a picture of the fire right now at Mount Zion AME, taken by Cheryl Oliver #chsnews pic.twitter.com/M5MNjgADf1

Mount Zion was previously destroyed in a fire on June 20, 1995, by two members of the KKK. The perpetrators went on to destroy a second African-American church.

The recent series of fires follows the mass shooting at Emanuel African Methodist Episcopal Church in Charleston last week, which left nine people dead. The Mount Zion fire is the seventh to occur at a predominantly black church since the shooting on June 18, although authorities investigating the incidents believe that not all of them are arson and that none of them so far appear to be racially motivated:

In addition to coming near the anniversary of Mount Zion’s previous KKK-related destruction, Tuesday’s fire comes just after the South Carolina KKK announced plans to hold a rally in support of the Confederate flag. On Twitter, alarmed users questioned the thoroughness of the investigation process for these incidents. They did so chiefly by way of the NAACP‘s #WhosIsBurningBlackChurches hashtag.

Yet another church. When will this be investigated? #WhoIsBurningBlackChurches https://t.co/2o6sBitf4J

Hey @FBI @CivilRights how many churches gonna need to burn? What's the number so we can hold you to something. #WhoIsBurningBlackChurches

Why are the politicians and outlets that always whine about "Religious Liberty" not discussing #WhoIsBurningBlackChurches ?

But ABC reporter Stacy Jacobson, who was on the scene at press time, reported that lightning may have been seen in the area prior to the fire.

.@LCWxDave says there was lighting in the Greeleyville area around 6-7p.m. officials haven't said what they believe started Mt. Zion fire.

Jacobson also reported that the church appears to have been heavily damaged by the fire.

We're en route to an AME church fire in Greeleyville. Official say the bldg roof has collapsed & 4 FDs are on scene. #scnews

Lots of flashing lights – firefighter on scene tells me there *were* a lot more pic.twitter.com/itvmJi42OG

Whether this is the latest in a pattern of arson that has historically been committed against African-American churches during times of social upheaval, or just an accident, remains an ongoing investigation.

Update 9:15am CT, July 1: An unnamed “federal law enforcement source” tells NBC News that the fire at Mt. Zion AME was not caused by an arsonist.