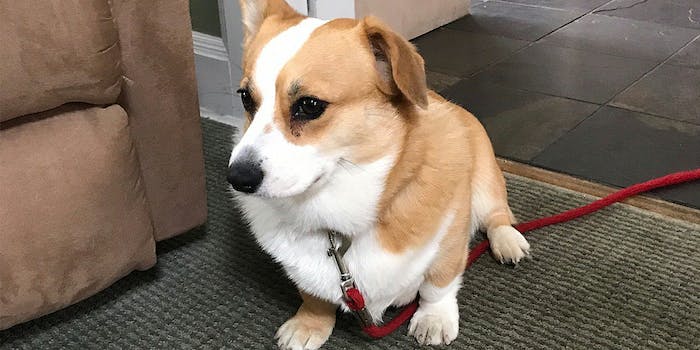 He also thinks that his corgi doesn't have knees.

The motive behind the “take a knee” protests that NFL players are participating in is perfectly clear. The simple act of kneeling down during the national anthem is intended to raise awareness about how people of color are treated by police and the criminal justice system. Many conservatives, instead of listening to the people who are kneeling, are choosing to misinterpret the protest. They claim that the action is un-American. Last week, Vice President Mike Pence left a Colts game because he thought that the kneeling players were showing disrespect to the country.

Today, Bill O’Reilly decided to use his poor, oblivious corgi to make the worst take yet on the “take a knee” protests.

So many questions. How do you think Holly is able to sit? Why do you assume Holly wouldn’t support the protest? Why is Holly on a leash inside a house?

The reactions to O’Reilly’s tone-deaf tweet were swift and merciless.

Holly jerked off to completion on a voicemail to me. https://t.co/xCze2A5CSw

Holly would also eat her own poop if you'd let her, Bill. https://t.co/6nisITW7eP

A couple of people suggested that Holly could be the star of a rescue film.

ocean's 14 but they've given up crime to rescue this dog https://t.co/P43Ukfiaat

— the supreme court will destroy everything we want (@SeanMcElwee) October 16, 2017

"HOLLY I'M COMING TO GET YOU, BABY, HANG IN THERE." Liam Neeson. https://t.co/d3PPsQ2jlJ

Holly, if you can read the internet, let us know if you’re okay.