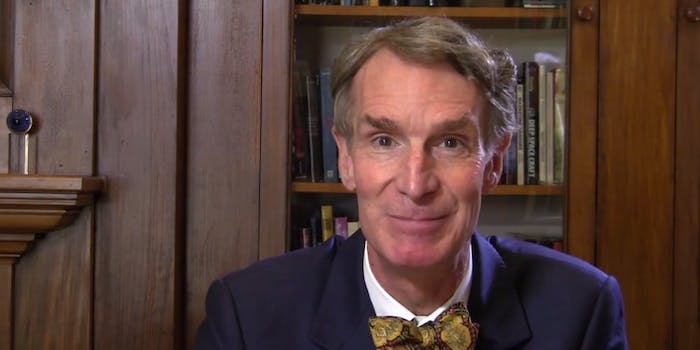 The Planetary Society CEO and science advocate reached out to President Obama on Thursday with the budget for the Planetary Science Program in danger of being cut again by the Office of Management and Budget, and he’s even offering a number: $1.5 billion a year—less than 10 percent of NASA’s budget, which is less than 0.5 percent of the federal budget.

“We all understand it’s a push-and-pull process—a negotiation,” Nye said. “But planetary science deserves special attention, because it is special.”

Nye explained that this part of NASA looks for signs of life on other worlds and made it possible for the Mars Curiosity rover to land on Mars and explore the planet, which have already changed history and can only help the U.S. economy by creating new businesses and economic growth.

“With a space program, everyone in our society comes to believe and expect that any problem we face can be solved,” he explained. “It’s inherently optimistic. It’s part of our national character.”

And investing in these new innovations with the suggested funding, it can change the world even more.

You can read Nye’s open letter below, or in its entirety on the Planetary Society blog.

The space program, NASA, is the best brand the United States has. Everywhere in the world, people respect and admire what NASA does. Right now, what NASA does best is explore the Solar System through the Planetary Science Program.

People around the world shared the seven minutes of terror as we lowered an extraordinary car bristling with extraordinary instruments onto the surface of Mars from a crane held aloft in that alien sky by rockets. Many thought it was impossible because nothing like it had ever been done before. You and your family remember applauding as a replica of that rover rolled by in the inaugural parade.

Over the last few years, Congress has added back funding for the planetary program that the Office of Management and Budget has cut. We all understand it’s a push and pull process–a negotiation. But planetary science deserves special attention, because it is special. It is a remarkable value in which we should maintain or even increase our investment. We recommend that planetary science receive $1.5 billion dollars a year. That’s less than 10 percent of NASA’s budget, which in turn is less than 0.5% of the federal budget.

The planetary science division of the space program accomplishes extraordinary things, because it is extraordinary. We want to look for signs of life on other worlds, places like Jupiter’s moon Europa and Saturn’s moon Enceladus. That work is done by our planetary explorers, scientists and engineers, who really are seeking signs of life on another world. Such a discovery would be astounding. It would, as so many astronomical discoveries have, change the course of human history.

Planetary exploration not only brings us astonishing discoveries from other worlds, it inherently leads to innovation, because we invest in solving problems which have never been solved before. That in turn creates new businesses and economic growth. But more importantly, supporting a robust space program raises everyone’s expectation of what’s possible. With a space program, everyone in our society comes to believe and expect that any problem we face can be solved. It’s inherently optimistic. It’s part of our national character.

So Mr. President: we strongly recommend that you make sure that funding for the planetary science program is at least $1.5 billion dollars per year. It will keep our current missions flying, ensure we create new missions, and it will lead to amazing new innovations, new businesses, and new discoveries for our future. Investing in planetary science changes the world.

Photo via The Planetary Society/YouTube