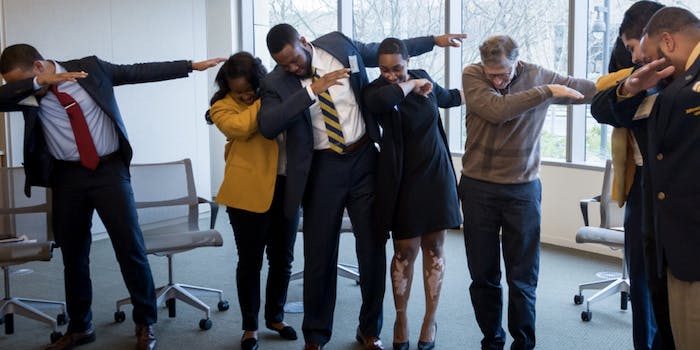 Bill Gates finally hit the dab, and it’s just as bad as we feared

The dab is a dance that went from “underground” to “extremely mainstream” in the blink of an eye. Unlike the dougie, the chicken head, and the twist, whose lifespans were rather short, the dab shows no signs of leaving the pop culture conversation anytime soon.

Unfortunately, this means that people who have no business doing the dab will convince themselves that, in fact, they should be doing the dab.

Remember when we wrote about Donald Trump potentially dabbing and how bad it would be for humanity? Well, even though Bill Gates’ dab isn’t quite as life-threatening, the results are still painfully awkward.

I learned a lot from these great students… (not all of it was school related): https://t.co/vdiJx4fYRh pic.twitter.com/PfUrmu2tct

Clearly he didn’t learn much if his dab was that off. Now let’s grade the other visible dabs in this photo.

Guy in striped tie: Although the elbow isn’t lifted high enough for perfect execution, this is still as solid dab. B

Guy in red tie: So into his dab you can’t even see his face. A-

Girl in black dress: Dab is great even as she is adjacent to an awkwardly dabbing Bill Gates. A+

Also, Gates has apparently done this before, but the Internet was too shocked to digest it properly.

Wow, this was even worse. How can someone so rich not have a person around to teach them how to dab correctly? And why would Gates waste his time dabbing when he could be off creating some new type of technology to aid humanity? Is nothing sacred anymore? Who out there can help us put into words what we just witnessed?

Bill gates is a billionaire after all, but his dab game weak af pic.twitter.com/4ZzAlwP7aa