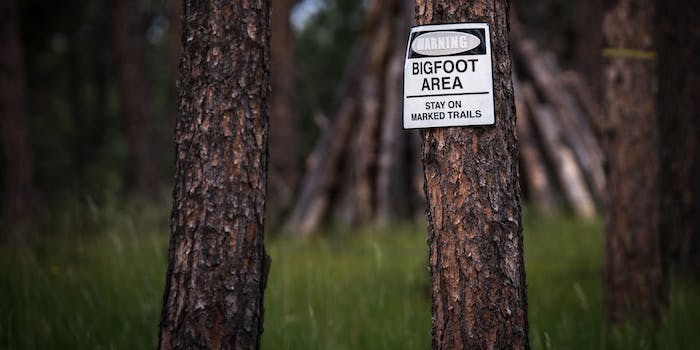 The footage is raising eyebrows for its sounds.

In a video shared to YouTube on Feb. 2, two men claim to have witnessed the elusive Bigfoot, also called the Ohio Grassman, at Salt Fork State Park. The video has since gone viral, wracking up nearly 480,000 views over the course of a few weeks.

In the description to the video, one of the men writes that he and his companion heard “strange noises” while flying their drones at the state park. The posted video, which runs just over 10 minutes, includes aerial footage as well as shots from the ground.

In the video, a distant figure with dark fur can often be seen wandering the trees. The humanoid figure walks on two feet with a reasonably steady gait. The most compelling part of the video, according to commenters, was the included sound. At several points in the video, uploaded by We Do It Outdoors, strange bellowing sounds can be heard from the direction of the figure. The same sounds can also he heard echoing through the trees and from the inside of a cave.

In the comment section, people dissected the video and debated its validity. Unsurprisingly, the majority of commenters believed the video to be a farce. Sarcastic comments vastly outnumbered those of believers, but plenty of people still took the time to outline why they believed the video to be real. They also encouraged the posters to venture back out to find hair samples, remains, and other hard evidence.

Bigfoot sightings are a relatively common occurrence, particularly in the Pacific Northwest. More than 10,000 people have reported Bigfoot sightings in the last 50 years, according to Fox News. More than 10 supposed sightings have occurred in the last year. Reports of Bigfoot range from completely absurd to genuinely believable, but no legitimate evidence has ever been brought forward. Still, a surprising number of people truly believe that something—call it Bigfoot, Sasquatch, or the Ohio Grassman—is out there.

Stories of Bigfoot-esque creatures have been around for centuries. While the video from We Do It Outdoors is unlikely to be the key to uncovering the persisting mystery, it certainly got people talking. And whether or not you believe in the possibility of an undiscovered hairy bipedal creature wandering the woods, the video is certainly entertaining.