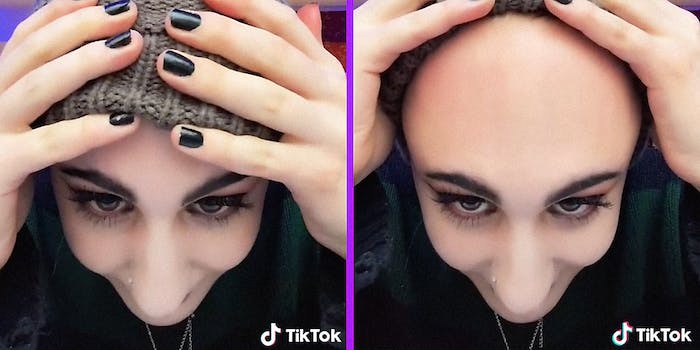 During the most recent round of millennials and Gen Z fighting over hair parting, I found myself silently screaming what I realized in my twenties: People with big foreheads can’t do middle parts, they are a nightmare for us. Please, think of the big foreheads.

Well, TikTok is. I was drawn into the “fivehead” community after seeing the forehead check circulate, and actively investigating how many fingers mine is (four) and whether I need curtain bangs (no). Last year’s Time Warp Scan trend also messed with people’s heads. But an October 2019 TikTok set the bar for big forehead energy: “Pretty face need more space,” said user marley.roman.

Then there was BuzzFeed’s story about Camilla Coleman Brooks, a model who recently underwent forehead reduction surgery. Brooks documented her recovery process on TikTok, and told BuzzFeed she “didn’t do it to make anyone else feel self-conscious about it.” But she also did a before-and-after for commenters who couldn’t quite see a difference, and no doubt dealt with harassment for her choice.

Inside the ‘fivehead’ community

Forehead/fivehead TikTok doesn’t just reveal and challenges, though some of those produced great art. It includes the big forehead positivity community, as well as tutorials for minimizing them. It’s also a place for reevaluating insecurities and past bullying, and wielding a new agency and ownership. In a viral TikTok from last April, user bingmyham recounts being made fun of in middle school for her forehead, as she applies clown makeup to her face, then reveals that a video she made about her forehead got thousands of views.

Izzey, who goes by yourfavfivhead on TikTok, tells the Daily Dot she started the account in 2019, “with the purpose of making jokes and light of my forehead, which was my biggest insecurity at the time.” An early TikTok went viral, but with more views came more negative comments.

“I know that the people who follow me in particular are super supportive and kind because most of them can relate to me to a certain extent,” she says, “but I’ve also found that it can be very harsh and negative on TikTok, because people have no filter when it comes to being behind a screen, and especially when there are no consequences.”

This week, Ella (soup_for_frogs on TikTok) clocked more than 5 million views for slowly revealing her “giant ass forehead” with dramatic precision. “I’m honestly shocked that my post got that much attention,” she tells the Daily Dot. “Some people were making jokes about it but I also got so many amazing and supportive comments!”

Ella says people messaged her about their own forehead insecurities, too. “I think we’re often taught to hide our insecurities or ‘flaws,’” she says, “but I’ve realized the only way to be the best and most confident version of yourself is to learn to accept those and be open about it. I did this when I grew out my bangs after years of having them!”

Thankfully, this seems to be the prevailing sentiment on forehead TikTok. Keiara, who goes by 6headqueen on TikTok, says in her bio the account is a “safe haven for my big forehead folks,” and her videos both poke fun at and embrace hers. In an early January video, she talked about only recently finding acceptance and pride after years of insecurity.

“Bitch, I am motherfucking cute,” she concludes.