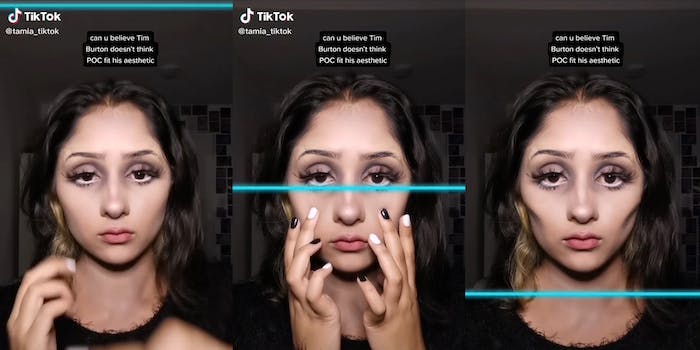 Tim Burton certainly has a type.

The filter is essentially a blue line that “scans” the screen and can warp faces, bodies, and objects. People have gotten very inventive with filter, turning themselves into Christmas trees and genies. But by pulling down the skin under your eyes and moving your fingers down your cheeks at just the right moment, some users discovered they kind of look like Tim Burton characters. Well, at least ones with big eyes and hollow cheeks. Which is a lot of them.

One of the trends within this challenge is people calling out the glaring lack of diversity in Burton’s films. In 2016, the director fumbled a question about why his films are always so white, and people took matters into their own hands, using makeup and art to create characters.

Not everyone got the results they wanted from this trend, but perhaps it’s also time to talk about the unattainable beauty standards Burton has put into the world.