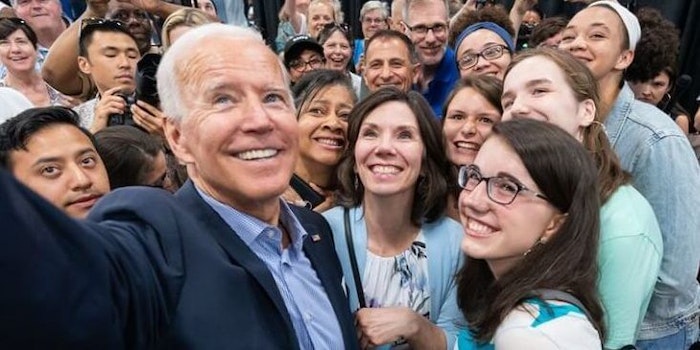 What’s a candidate to do in the midst of such drama? Get down with the cool kids in viral video, of course.

In the undated video credited to the Washington Examiner, a fresh-faced group of Biden supporters stands before him, merrily singing, “Go Biden, yeah, yeah. Go Biden, yeah, yeah. Biden’s back… alright!” The former vice president seems thrilled with the performance, which is set to the melody of Backstreet Boys’ “Everybody (Backstreet’s Back).”

The video, which could be described as a live-action remake of the “Backstreet’s Back” meme, is getting attention much like that received by the “High Hopes” dance of former South Bend, Indiana Mayor Pete Buttigieg. Which is to say it’s inspiring a full-body cringe online from left-wing users.

Gaze into the abyss of Biden 2020pic.twitter.com/9fe7LG9ySR

“I feel physically revolted and I’m not sure I can finish my coffee now,” commented @Rad1calCentrist. “Thanks.”

For @troyrudd, the video called to mind a certain group of young conservatives. “Looks like some Turning Point youth turned out for Joe,” he said. “Nice.”

Ain’t a single one of them had properly seasoned chicken

As a white guy, I proclaim this to be too white.

This is actually apropos because he’s running an early 00’s campaign pic.twitter.com/XUTke4gKb6

To paraphrase another Backstreet Boys’ song, it seems safe to say that many Twitter users don’t want it that way.