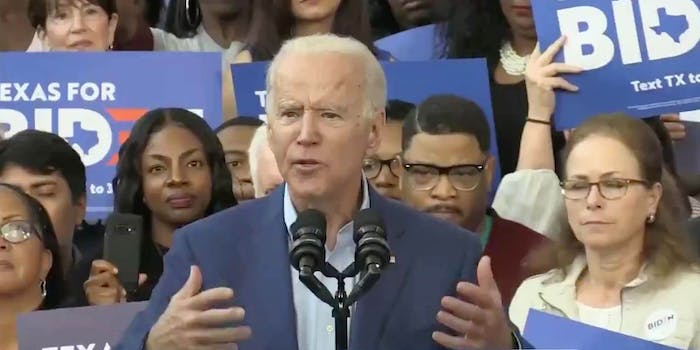 'All men and women created by, go, you know, you know the thing.'

Democratic candidate Joe Biden failed miserably while attempting to recite the Declaration of Independence on Monday during a speech in Texas.

The former vice president, fresh off of his victory Sunday in South Carolina, made the gaffe while addressing a rally at Texas Southern University.

“We hold these truths to be self-evident,” Biden began. “All men and women created by, go, you know, you know the thing.”

The incident was immediately seized upon by the candidate’s detractors, who have long argued that Biden’s frequent fumbles serve as ammunition for a malevolent President Donald Trump.

“Glad they’re cashing all their chips in on this guy,” Twitter user @Mikelennial said.

“This guys gonna get chewed up by Trump,” @jhaug2 added.

One user even described Biden’s presidential run as “elder abuse.”

The moment quickly became a meme as well, with users attempting to churn out the best content related to Biden’s mishap.

The phrase “you know the thing” was attached to everything from former presidents to political yard signs.

During Tuesday’s Democratic debate in Charleston, South Carolina, Biden mistakenly claimed that 150 million Americans, or roughly half of the country’s population, had been killed by gun violence since 2007.

Biden also recently referred to Fox News’ Chris Wallace as “Chuck” moments after being questioned about a false story in which the candidate claimed to have once been arrested in South Africa.

Although Biden has billed himself as the “no malarkey” candidate, the former vice president can’t seem to go more than a few days without creating malarkey all on his own.

The quote he was looking for is that all men and women “are created equal.”