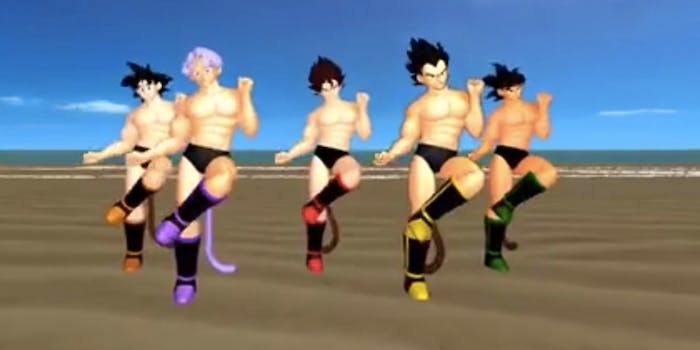 You will never look at 'Dragon Ball Z' the same way again.

A San Francisco video editor has produced what is perhaps the greatest Beyoncé remix the Internet has ever seen—and all it took was slapping the song “Formation” onto an existing animation of the Dragon Ball Z sexy dance.

As if the five characters dancing around in underwear and rainbow-colored boots somehow wasn’t gay enough, Angel VanStark‘s glorious remix almost makes the viewer forget that the song was created by Beyoncé and not by a spiky-haired anime boy band.

Within about 12 hours of being posted to Facebook, the video had 124,ooo views. VanStark, who identifies as genderqueer and gay and prefers they/them pronouns, told the Daily Dot the video “took longer to upload than edit.”

“If Beyoncé sees this video, I hope she giggles, doesn’t sue me, and endorses Bernie Sanders for President,” wrote VanStark in a Facebook message to Daily Dot.

But behind the many LOLs to be had watching the frighteningly on-beat remix, there’s a serious backstory too. VanStark was kicked out at age 19 for being queer, they said, and ended up doing video work in San Francisco for a few years before finally reconciling with family. The experience led VanStark to become an outspoken advocate for LGBT rights, and fun videos like the Dragon Ball-Beyoncé remix are closely tied to an overall mission of gaining cultural acceptance.

“Content about the struggles that people go through isn’t going to get the attention of the general public—the people who need to see the content,” VanStark said. Sometimes, the best approach is to make people laugh. Or in this case, to make beloved anime characters slay.