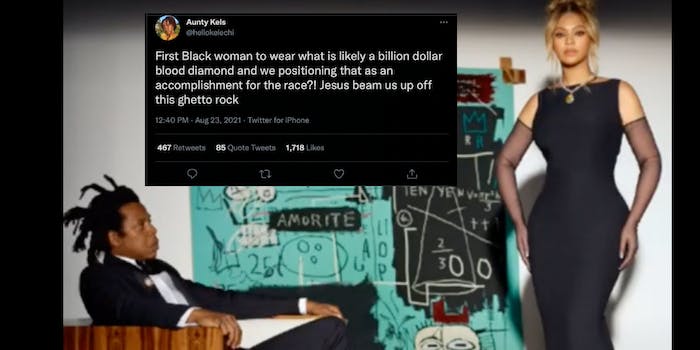 The new ad campaign also received mixed reactions for its $2 million pledge toward HBCUs, with some calling it 'cheap.'

Tiffany & Co. announced its “ABOUT LOVE” campaign starring Beyoncé and Jay-Z earlier today, and while some are loving the iconic references, many are calling out issues with the campaign including the use of the purported blood diamond, a never-before-seen Basquiat painting, and a “cheap” donation.

The campaign as a whole is a clear homage to Breakfast at Tiffany’s, with Beyonce donning a black gown with long black mesh gloves, an Audrey Heburn-style updo, and the iconic $30 million yellow diamond necklace worn by Audrey Hepburn in the film’s promotional images.

The full campaign will roll out globally on Sept. 2. A film accompaniment to the campaign created by director Emmanuel Adjei will debut on Sept. 15 on the Tiffany & Co. website and will feature a cover of “Moon River” (made famous by the film) sung by Beyonce herself.

Beyoncé Knowles-Carter is the first Black woman and fourth woman in over a century to wear the 128-carat stone that was acquired by Tiffany’s in 1879. The others to wear the diamond include Mrs. E. Sheldon Whitehouse in 1957, Hepburn in 1961, and Lady Gaga in 2019.

While the history of this particular stone is not completely transparent, it was discovered in the Kimberley diamond mines in South Africa in 1877 and was soon purchased by Charles Tiffany who then had it cut down from its original size (287 carats).

Diamonds mined in Africa have historically been rooted in conflict, spurring dangerous child labor and often funding and strengthening apartheid efforts, resulting in rampant violence and mass killings in many countries. Many have been quick to point out how problematic the diamond remains, despite Tiffany & Co.’s “zero-tolerance policy towards conflict diamonds.”

“First Black woman to wear what is likely a billion dollar blood diamond and we positioning that as an accomplishment for the race?! Jesus beam us up off this ghetto rock,” tweeted @hellokelechi.

“As global leaders in sustainable luxury, Tiffany & Co. is committed to sourcing natural and precious materials in an ethical and sustainable manner,” the company’s website states. Tiffany’s also made a diamond-transparency pledge in 2019, which strives to inform buyer’s on exactly how and where from their potential diamonds have been sourced.

Another controversy in the campaign is the revelation of a never-before-seen Jean-Michel Basquiat painting titled “Equals Pi.” The 1982 work came from a private collection owned by the jewelry company that hadn’t been shown until now, according to Tiffany’s.

The late painter was publicly anti-capitalism and many are noting this clash of ideals within the campaign.

“Basquiat wasn’t the type of person or artist to approve of his pieces being used in an ad from multiple billionaires (uncontextualized, at that). His art was all about pain & beauty in low places, so, it comes across as a tone deaf & flippant flex on his legacy,” tweeted @Nezylon.

However, Tiffany’s Executive Vice President of Products and Communications Alexandre Arnault told WWD that the painting must be “some kind of homage” to Tiffany’s in that it showcases the brand’s signature shade of robin’s egg blue:

“We don’t have any literature that says he made the painting for Tiffany, but we know a little bit about Basquiat. We know his family. We did an exhibition of his work at the Louis Vuitton Foundation a few years back. We know he loved New York, and that he loved luxury and he loved jewelry. My guess is that the [blue painting] is not by chance. The color is so specific that it has to be some kind of homage.”

Jay-Z famously purchased another Basquiat painting “The Mecca” in 2013 for $4.5 million and often references him in his songs. For the last few years, folks have noted his adoption of the late artist’s signature hairstyle.

Others are defending the use of the painting, saying Basquiat was no stranger to luxury and coveted fame just like other celebrities.

“Basquiat battled his personal issues & he was a drug addict & bisexual, but he had friends in high & low places & he was comfortable in both! Basquiat had a friendship with members of the family behind Tiffany’s. Please research him & learn more about who he was!” tweeted @ReSistaKay.

“His art did focus on the broken and the oppressed, but lets not pretend like he didn’t seek wealth or notoriety for his work,” agreed @timanderson88.

Through Tiffany’s partnership with the Carters, the new campaign—which aims to show love in its “diverse facets”—also announced a pledge of $2 million toward Historically Black Colleges and Universities (HBCUs).

While many are applauding the monetary commitment, some are calling it a PR spin, and others are criticizing the amount itself, given that the company is valued at almost $5 billion and the Carters’ net worth is almost $2 billion.

“…Similar to the small wins the NFL’s ‘Inspire Change’ initiative has yielded, Tiffany & Co’s altruism comes off as public relations spin to preclude any accusations of cultural appropriation via the use of Basquiat’s work,” Keith Nelson Jr. wrote in an essay for Mic.

“Yo the damn diamond is worth $30 million alone. Their cheap donation didn’t even match the value of the jewels they are advertising,” tweeted @InspectorNerd.

“Is the $2 million annually until Jesus comes?” said @globalerica.

Others have chosen to appreciate the campaign regardless of what some consider to be flaws and welcome the inclusion and support of HBCUs.

“Here you all go. Experts with no expertise. Where was the energy when Rihanna came out as a billionaire. Worth 1.7 billion, I didn’t see y’all woke people asking her to donate her wealth but I guess it’s double standards when it comes to beyonce,” tweeted @kingbeyhive18.

The Daily Dot reached out to Tiffany & Co. for comment.