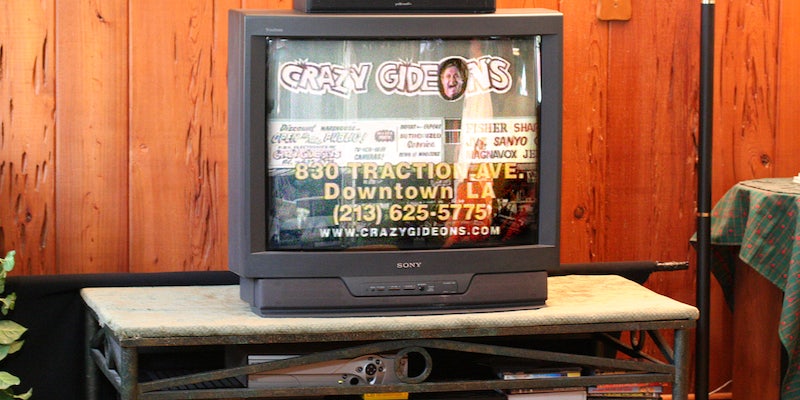 Celebrate the dying art of the local TV ad

Let's not forget the majesty of stilted, low-budget, broadcast commercials.

These poorly shot, horrendously acted spots are the mom-and-pop stores to television’s increasing strip-mall-ification, blooms of local flavor and creativity amid an onslaught of market-researched ads from national chains. And as our TV-watching habits veer into Netflix-streaming territory, there are fewer opportunities to see them. Still, they’re beloved in a way no Honda commercial could be (and even deserving of the SNL treatment—see: “Mike’s Marbleopolis”). Everyone can go to Disney World, but only a select few get to hang out at Wild West City in Netcong, N.J.

Everyone in America will have seen that Peyton Manning Nationwide ad, but the “Corner Furniture” jingle is what’s going to live in your heart.

In honor of this dying breed, here are some of the best local TV ads from around America. Keep the art alive.

Illustrated by someone who has never seen a person fall down stairs.

Because 39 years is absolutely a normal anniversary to celebrate.

Crazy Eddie is to Crazy Gideon what blues music is to the Talking Heads. The latter wouldn’t be possible without the former, but takes the concept far beyond what anyone thought possible.

Why pay for actors when you can get actual shoppers? And is it just me, or is the “backpacks” girl an alternate-universe Miley Cyrus?

The solution to drunk driving is definitely not drunk horseback riding, Montana.

This thing would allegedly air for half an hour on late night TV in the Philly area. Native Blair Thornburgh called it a “cultural touchstone for meeting other Philadelphian dirtbag teens in college.”

There is only one way to pronounce this event space, and that is: “The Grand PROSPEHHALL.”

Here’s to 2015, when the bizarre depths of the Internet can only lead to weirder television ads. Don’t let the fine art die.

Photo via Mike Spasoff/Flickr (CC BY 2.0) | Remix by Jason Reed