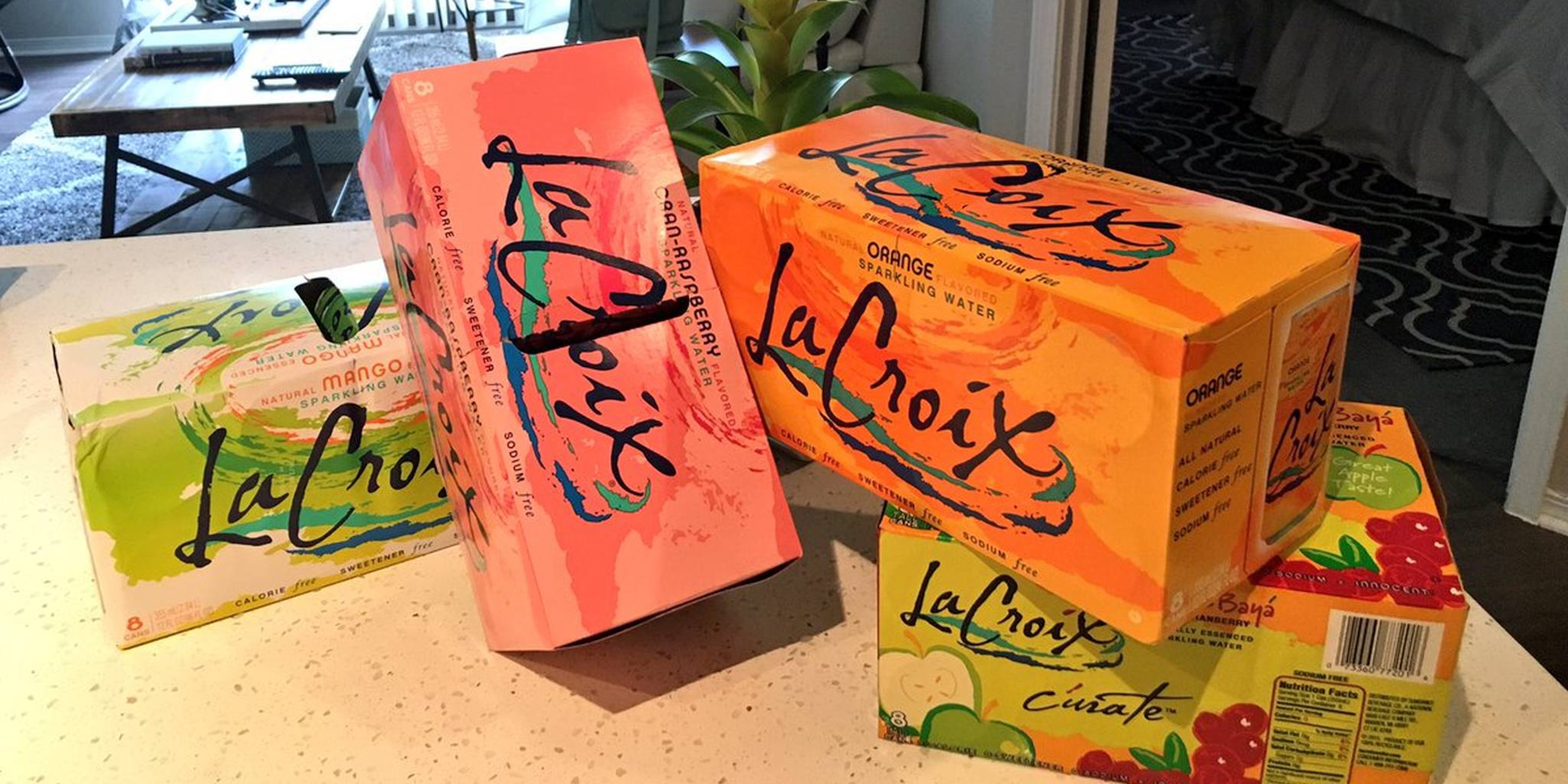 LaCroix is from the skies above.

Before you read this, I need you to know how to pronounce LaCroix. It’s important that you say “la croy” and not “la kwah.”

Now that we’ve cleared that up, let’s get to the serious business. LaCroix sparkling water is taking over the world. Period.

OK, well, it’s taking over our hearts, tastebuds, and refrigerators. Each can is filled only with carbonated water and natural flavors. None of that weird stuff you can’t pronounce, no calories—just deliciousness.

I’m clearly obsessed. But I’m not alone! Check out these New Yorkers flocking to a gigantic wall of LaCroix inside a Brooklyn Whole Foods. They’re like kids in a much healthier candy shop, essentially.

Or get a load of this guy, who rapped about his dedication to the sparkly refreshment in a dazzling music video.

If you can’t relate, you must not be aware of the divine beverage. Fear not, as I’m about to lay some deep, deep water knowledge upon you. So take serious notes.

Behold, all 20 flavors of LaCroix, ranked:

If you’re lying in a bathing suit by a large body of water, I suppose this is a good option. I mean, it’s whatever.

So the thing about this flavor is that with an actual lime and some of your favorite vodka, it’s great, but without it’s just decent.

It’s like a soda, but not as good, because it doesn’t have all that weird stuff in it. But then you remember it’s not absolutely terrible for you, so you feel better about yourself. That part is nice. They might be on to something here.

This is one of the bolder flavors, which is fun! Cherry and lime, kind of reminds me of a 7-11 Slurpee.

You know when they give you cucumber water at those fancy resorts? This is a lot like that, but sparkly and with a hint of blackberry. Basically, it’s fancier fancy water.

*cough* vodka *cough* It’s delicious on its own, don’t get me wrong. But from experience: add vodka. Just saying.

If you like Mango, maybe this is a good one? I’ve heard it’s tasty from my mango-loving boyfriend, so I keep the house stocked.

This flavor is tasty, and I’ve found that it’s easier to find at many stores. But the berry flavor is similar and a bit tastier still.

Cantaloupe and grapefruit with bubbles in one can? Can you say summmmerr!?

Apples and berries galore. It reminds me of apple juice boxes from when I was a kid, and who doesn’t like that?

Pineapple and strawberries—it’s super sweet! Honestly, I’d mix any of these with vodka, but this plus vodka at your party makes you the best host ever.

Om nom nom. It’s one of the “newer” flavors, but boy do they have this stuff figured out!

You know those sour watermelon candies, the ones that are covered in a ton of sugar? Yeah, this is like that. OK, that’s a total lie. But if you kind of think about it, it’s… not? Just try it and you’ll understand.

A genius added this flavor to the bunch. It’s as simple as that. It’s also the most popular flavor in NYC Whole Foods, which is a pretty big deal.

What could go wrong here? It’s slightly similar to the Cran-Raspberry flavor but somehow worlds better.

Who doesn’t love a good orange soda, amirite? Orange LaCroix is even better because your entire mouth doesn’t turn orange from the combo of Yellow 6 and Red 40 artificial colorings.

Actual passionfruit is totally weird. And passionfruit-flavored things can be super funky. But whether or not this stuff tastes like real passionfruit or not, it’s a gift from the heavens above.

Stop judging and hear me out for a second. When something simple is that delicious, why mix it up? Lemon La Croix is better than any lemon water you’ve ever had.

Though Orange LaCroix made it all the way to No. 4 on my list, they went and outdid themselves by making tangerine. Even better, even more mouth-watering, even more… I’m in love, alright?

Think I’m totally nuts? Tweet me your favorites—@melaniebprice. But most importantly, get off your butt and go get some LaCroix. Cheers!