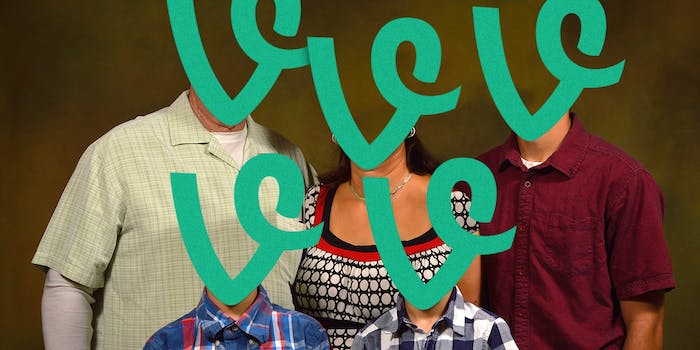 The 9 hilarious families you have to follow on Vine

There’s a whole new set of pressures on people raising kids. With parents taking to Facebook, Instagram, and Pinterest to brag about their little wonder’s latest accomplishments, it’s easy to feel like you’re somehow failing your child.

But you needn’t buy into the hype and false superiority of mommy blogs. There’s a whole community of plugged-in parents unafraid to be honest about the trials and tribulations of raising a kid in the 21st century—a life they’re exploring in six-second bursts. Over on Vine, families frustrated or bored by their daily grind began filming the children’s antics as a way to grow closer, and many have struck viral gold.

These nine clans broadcast all the hilarious, bizarre, and relatable obstacles that come with raising a kid in the new millennium, and they just might make you feel a little less alone. So what are you waiting for? Tap that follow button and find out what raising a kid is really like.

With her comedic timing, frank honesty, and adorable antics, Ava Ryan captured the Internet’s heart six seconds at a time. It all began when her mom Katie signed up for the video-sharing service so the extended family could get a daily dose of the adorable 4-year-old, but Ava’s personality proved too big to contain.

Now this precocious kid has over 1 million adoring fans following her antics, but as Katie told the Huffington Post, it’s not about fame. Her daughter’s humor has helped her family heal in a tough time. After Katie’s disabled sister passed away, a young Ava brought some much needed light to the grieving group. “It was something to be happy about even though we were facing a tremendous loss,” she said.

If you ever scrolled through Vine’s “Popular” page, chances are you’ve seen a few of Arthur Luton’s infamous road rage rants: The 29-year-old Brit became a viral sensation with videos of himself screaming profanities while stuck in traffic. But don’t be fooled by this truck driver’s gruff exterior; since becoming a dad, he’s uncovered the soft spot deep in his heart.

After taking a brief hiatus from the site following his daughter’s birth, he’s returned to post videos that feature an adorable daughter, Aubrey, and has expertly mined the comedy of parenthood. For fans who crave the same surly jokes that made him big, this dad has plenty of unexpected punch lines and perhaps a cautionary tale or two for would-be parents.

By day, Blake Wilson is a simple family man living in the suburbs of Atlanta, but as soon as the father of four dons his signature Batman mask, he transforms into the super-parent known as BatDad. The origin story of this Vine vigilante began when the 29-year-old Wilson went shopping in August of 2013, noticed a Dark Knight mask in the toy aisle, and bought it. On the car ride home, he slipped on the mask on and began dishing out parenting advice in a gruff tone.

Since then, Wilson has shot to viral superstardom, amassing some 3 million followers along the way. Between telling his kids to get their butts off the kitchen table and giving them lollipops for potty training, this guy just wants to make paternity a bit more fun. Wilson summarized his success best during an appearance on The Today Show. “It makes people smile because it’s so stupid,” he said.

If ever there were an adorable duo to rival Katie and Ava Ryan, it’s Harmony and Elliott Smith. The single mother and her son first gained the Internet’s attention in 2011, when Harmony posted a priceless YouTube video of her son receiving his first kiss. Since then, the twosome has grown up a bit, and they have found new ways to make their fans smile.

The 8-year-old and his mom currently rock amazing eyewear, compose songs about pooping, and dance to Ginuwine’s “Pony” like one no is watching. The pair’s talents haven’t gone unnoticed, either. Katy Perry loved their remix of “Dark Horse” so much she tweeted it out. There’s no endorsement more glowing than that.

When Josh Gaines first heard about a little app called Vine, he decided he would give it a try, recording six-second videos of himself. But according to Mashable, it wasn’t until he posted a one-off video of his son Evan that the San Diego, Calif., dad noticed an uptick in popularity on his account.

Gaines pursued the trend and began posting more videos starring his son and daughter, Johnna, making the account a full-fledged family affair. But this dad is not one to hold his children back from success; after people clamored for more Evan and Johnna, Josh created a dedicated account for each of his kids. Even his eldest son, A.J., who mainly stays behind the camera, has joined in on the Vine fun.

If anyone should teach a class in what it means to be the perfect dad, it’s Brock Hemsworth. This father doesn’t just let his 11-month-old daughter stay up late to watch It’s Always Sunny in Philadelphia, he also encourages her to achieve her dreams by promising her he’ll pay for a full ride to Hogwarts out-of-pocket.

Still, Hemsworth isn’t just a fun dad who lets his daughter party without consequence. It’s clear from the look he gets in his eye every time his daughter calls him “dada” that he’ll always be looking out for her.

When Jason Nash joined Vine in March 2013, it wasn’t with the ambition of finding viral fame. Instead, the comedian saw the fledgling social media platform as a new form of marketing, and he began creating micro-sketches in hopes that audience would seek out his feature film, Jason Nash Is Married.

“I did it to get an audience,” Nash admitted to LA Weekly. These days, with over a million followers, it’s clear that Nash has found one. The Los Angeles–based pop mainly collaborates with fellow Viners on brief but hilarious sketches, sometimes allowing his children to take part in the fun. As is typical with most of his comedy, Nash is often the butt of the joke.

For L.A. screenwriter Nick Confalone, Vine was never about making money or friends. This stay-at-home dad saw the new medium as a cure for boredom and a way to have fun with his newborn son. “I spent all my time watching him, what he was doing, how he played with his toys, the sounds he made, the way he moved—all the while spinning these tiny details into six-second stories,” he wrote in an article for Slate.

That attention to detail didn’t go unnoticed. After producing successful shorts starring his son, Confalone found his work appearing on CNN, Ellen, and even in the Tribeca Film Festival. Confalone has since toned it down, realizing that his son is growing as much as the app. Instead of focusing on working with advertisers and being pressured to produce content, he cherishes the moments with his son and broadcasts them whenever it feels right.

At only 24 years of age, Marcus Kennard has his hands full, but this recently married father of two doesn’t let life get the best of him. He and his wife Teresa share both the challenges and comedy of raising two young daughters on Vine.

With well over half a million followers tuning in daily to see oldest daughter FayFay’s latest dance moves or precious moments with toddler Harmony, this growing family has something special about them. But life with two young girls isn’t always adorable, and Kennard makes sure that people know it, often posting hilarious squabbles between the sisters. At the end of the day, though, they’re still a family, and they always come back together in the most adorable way.

Photo via Crossroadsphototeam/Flickr (CC BY 2.0) | Remix by Jason Reed