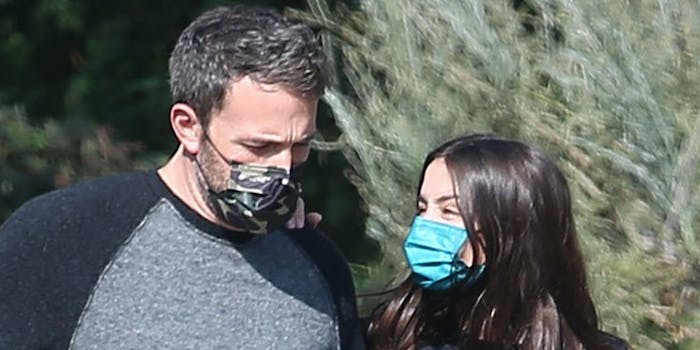 But alas, BenAna will no longer walk Deep Water‘s red carpet as a couple. They broke up in a “mutual and amicable” manner last week, but not without leaving us a parting gift: the first iconic paparazzi photo of 2021.

Shared by the beloved stan account Ana de Armas Updates, it shows a mystery individual throwing a cardboard cutout of de Armas into the trash. (The same account later reported that it was allegedly Affleck’s brother, Casey.)

The cutout made its paparazzi debut back in June, when the couple brought it with them to hang out with Affleck’s kids. It’s this kind of detail that exemplified BenAna’s relationship with celebrity gossip media. While some Hollywood A-listers hate and avoid being photographed during their daily lives, others have tacit arrangements where certain moments can be shared by the tabloids for mutually beneficial publicity.

Without necessarily being staged, there was a certain self-awareness to moments like de Armas hanging out with a cardboard cutout of herself. And while this isn’t exactly relatable behavior, it makes sense from a “bored during lockdown” perspective. Affleck and de Armas both have high-profile movies on the way (The Last Duel and Zack Snyder’s Justice League for him, the new James Bond film and a Marilyn Monroe biopic for her), but for most of 2020, they didn’t have access to the traditional celebrity publicity machine. They made do with what they had at home.

Anyway, the Ana de Armas cardboard cutout has now been symbolically dumped in the trash, signaling the end of an era. Affleck could have disposed of it quietly, but if we’ve learned anything from 2020, it’s that he and de Armas know how to work an audience.