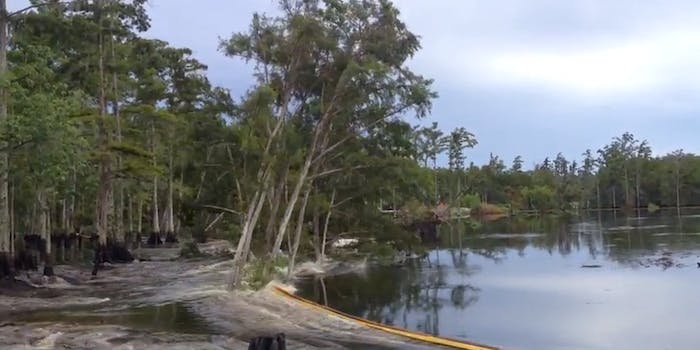 Here's a shocking look at what Mother Jones called "the biggest ongoing industrial disaster in the United States you haven't heard of."

Here’s a shocking first-hand look at the power and significance of what Mother Jones called “the biggest ongoing industrial disaster in the United States you haven’t heard of.”

In a video posted Wednesday to the official YouTube account of Assumption Parish, La.,  about 80 miles west of New Orleans, large cypress trees rapidly disappear into giant, underwater sinkhole. The collapse of trees around the edge of the swamp, known as a “slough in,” was triggered by seismic activity occurring in the area.

John Boudreaux, director of the area Office of Homeland Security and Emergency Preparedness, told the New Orleans Advocate that he went to go check out the sinkhole on Wednesday after tremors had temporarily halted the ongoing efforts to stop the sinkhole’s spread. It was only when he noticed the trees were moving that he whipped out his camera and started taking footage.

The sinkhole was first discovered on a patch of land leased by petrochemical company Texas Brine about a year ago and has since grown to encompass nearly 25 acres of swampland near the small community of Bayou Corne. The sinkhole has been estimated to be up to 750 feet deep and is accompanied by dozens of other sites in the area where natural gas has been observed bubbling up to the surface of the swamp.

Officials charge that the sinkhole was caused by the collapse of a salt dome more than a mile underneath the Earth’s surface, where Texas Brine had been mining for resources like sodium hydroxide and chlorine. The collapse was recorded a few months before the sinkhole was first observed.

Due to safety concerns, over 350 residents of Bayou Corne have been evacuated from their homes, and the state has filed suit against both Texas Brine and Occidental Petroleum Company, the property’s principal landowner. In addition, while nearly 100 Bayou Corne residents have taken Texas Brine up on a settlement offer, many others are filing a class-action lawsuits against the company with the help of famed environmental activist Erin Brockovich.