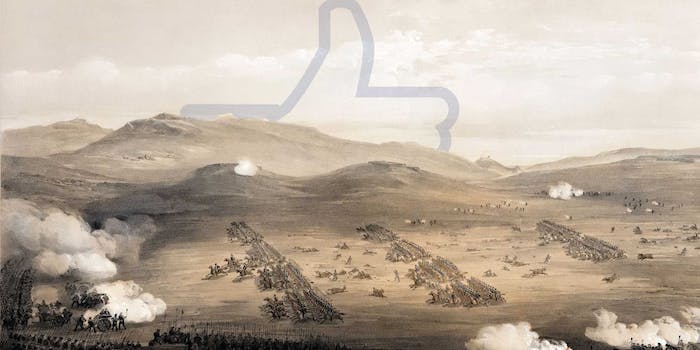 ‘Battle Hymn of the Digital Publisher’: a media epic in verse

This is what they must have meant / When they spoke of 'shareable content.'

Editor’s note: We have a Gmail filter that sends all poetry submissions to our spam folder, because poetry is stupid. Once we established that “Dave Infante” was not an exotic nom de plume designed to game the system, however, we read the thing, and laughed a little. Now, we encourage you to do the same.

Does the fruit hang low?

So harried readers get the gist?

Will the juice be worth the squeeze?

Can we templatize with ease?

If the partners want a taste,

Can we syndicate with haste?

Serve it up in cool new ways,

And we’ll have traffic spikes for days!

What can we turn around today?

Embed a ‘Gram and do it swiftly.

The war is Content, and we are in it.

Mount feigning heds, not one too untoward.

We ride for shareability. Forward! Forward!

Words are useless without good pics.

Those holy numbers, for which we fight.

They want video? So it goes.

Our operating budget is near zero.

A freelancer?! No, we need a hero.

Recent grads with dreams of blogging,

Who ask no pay for hours they’re logging.

Watch them turn to jaded realists,

Bottomed out on media’s shoals.

Have they seen our office bar?

As long as they don’t offend the star.

Tell them they have “hashtag influence,”

Hold close the truth, should they turn truants:

They are sharecroppers, mercenaries, hired hands.

They scroll their feeds with bitter resent,

When the fight grows hard, and the millstones, legion,

Get thee to a literary mag!

This is really more your bag.

There you can be a music critic,

Or a thoughtful author of short stories.

Can prestige cure that which made you sick,

Far from the front, Content seems less a battle;

A slaughter—that’s how it looks from here.

Are there even lines that publishers straddle?

Have we become the hell that we fear?

The secret of our world is thus.

I should say: these opinions are my own,

Not those of my employer, trust.

Clickbait is the thing to hate,

But it’s great, when the date

Is late and uniques you must inflate

Lest the investors debate your fate.

That’s your best shot at

Ours, not your own!

Is anyone still reading this? Pardon,

I got a little wound up there,

But if you enjoyed the verse herein,

Dave Infante is a writer living and working in New York City. Follow him on Twitter: @dinfontay.