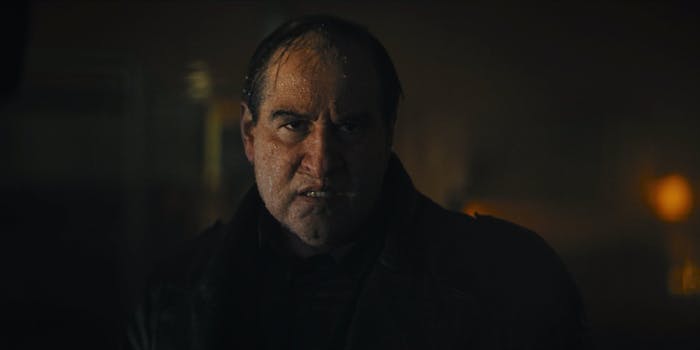 Saturday’s virtual DC FanDome event teased plenty of hints at what Warner Bros. and DC Comics had to offer, but The Batman easily won the day with a teaser trailer filled with a murderer’s row of talent—and one actor who’s completely unrecognizable as one of the villains.

The Batman is still in production, and thanks to the COVID-19 pandemic, director Matt Reeves still has to shoot a good portion of the film. But he still managed to bring an impressive teaser that hit a lot of sweet spots for fans. We got Robert Pattinson in costume as Batman and Bruce Wayne—and an acknowledgment of Batman’s eye makeup. We saw Jeffrey Wright as Jim Gordon, Zöe Kravitz as Catwoman, and felt the presence of Paul Dano’s Riddler.

The brief appearance of what looked like the Penguin threw fans for a loop. Not because they were shocked to see him; fans already knew that the character would show up in The Batman and that he’d be played by Colin Farrell. But the question remained because the character, in the brief moments we saw him, was not only missing nods to his iconic look but he also looked nothing like Farrell. In fact, to some viewers, that character looked like character actor Richard Kind showed up in the DC universe.

Although some fans tried to identify Farrell by his eyes, we weren’t even sure it was him until prosthetics makeup artist Mike Marino confirmed it on Instagram Sunday. Marino, whose resume spans more than 20 years in Hollywood, is credited for “prosthetic makeup design” on The Batman’s IMDb page; his credit appeared to be listed as “penguin makeup designer” a few months back. On the Instagram post, he identified Farrell with a hashtag. His current profile link directs followers to the Batman teaser posted on Reeves’ Vimeo page.

It’s certainly an impressive display of prosthetics. In them, Farrell is so unrecognizable that it took Marino to identify him. But for some fans who’ve taken to the comments of his Instagram post, that’s not enough proof.

“we BUILT THIS,” Marino replied to one commenter who kept questioning how Marino knew it was really Farrell under the prosthetics.

Farrell has previously said in interviews that he doesn’t have a major role in The Batman but he’s thrilled with what he does get to do.

“I haven’t got that much to do,” he told GMA News Online back in May. “I have a certain amount in the film. I am not all over it by any means. But there are a couple of some tasty scenes I have in it and my creation and I can’t wait to get back.”