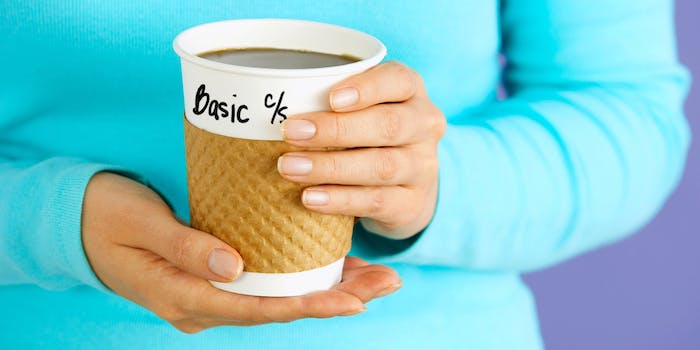 There's a little basic in all of us.

The coined nickname “basic bitch” has been floating around common banter for a while now, and is generally used as an insult toward someone we all know and are hesitant to actually interact with in public. The identity of this specific specimen is difficult to pinpoint at times, but if dressed the part, they could easily be spotted a mile away.

A basic bitch has been portrayed in many forms and fashions in movies, television, and literature, shining in all her glory. The most popular recent depictions can be seen in popular girl groups from movies like Mean Girls, Clueless, and Crossroads. Although the term can be coined as sexist or just plain rude, it shouldn’t be offensive unless the person receiving the nickname is insecure in their pick for the best spot to eat dinner based on the meal’s Instagram potential.

What is a basic bitch?

Urban Dictionary (aka the bible of bluntly identifying this generation’s popular slang) defines a basic bitch as someone who engages in unoriginal behaviors, modes of dress, topics of conversation, and interests. This person thinks that they are a perfect catch but in reality they wouldn’t even create a spark of interest from someone who partakes in other activities besides melting into the status quo of a mainstream agenda.

While engaged in conversation, a basic bitch can typically be recognized off the bat. They love to abbreviate all words like “omg” and “totes,” and actually says hashtag out loud. “throwback Thursdays” are their time to shine the light on their high school photos that actually look average, and Sundays are when their best-self comes to life after a few grapefruit mimosas with a side of eggs benny during brunch.

What does a basic bitch do?

There are a lot of stereotypical images of a basic bitch, which can be unfair at times since we all catch ourselves enjoying a cup of pumpkin spice flavored creamer with a splash of coffee, or jamming out to the new Chainsmokers radio single. Even if that’s not the case, a basic bitch is your normal, average working lady who you pass in the halls of Target during a typical grocery run.

To understand who this character is exactly, there is a Reddit section dedicated to pointing out the most basic characteristics of said person.

“The difficulties that come with marrying a basic bitch are coupled with the basic friends, basic goals, and basic thoughts—the mundane conversations about what amazing to-die-for flavors will Starbucks have this week and whether or not these yoga pants and leggings will look good today,” wrote Reddit user Economiconcology.

Someone replied to the Reddit thread saying the description is a shame, and that basic bitches “are often a lot of fun, though, and make good mothers.”

In all their glory, basic bitches will just be one thing: simply basic. And that’s OK! As much as the hipsters and people who think they are above them throw shade, the world’s economy would not survive without its most easily pleased customer.