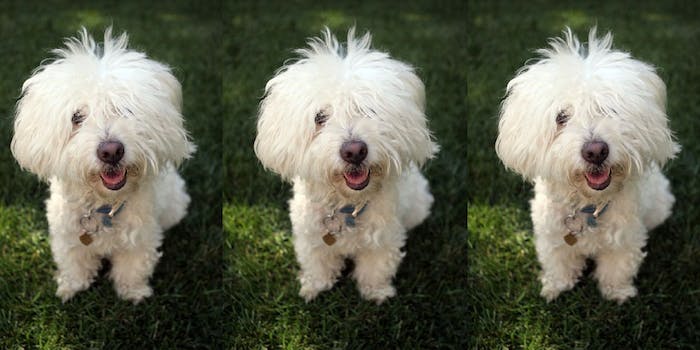 Barbra Streisand reveals that her dogs are clones

In this week’s cover story for Variety, Barbra Streisand posed for a photo with her three Coton de Tulear dogs. She clearly loves her canine companions. But if you look closely at the photo, you might notice that the dogs all look alike. Maybe she just likes this breed, you might be thinking. The truth is stranger: Two of the dogs are clones of a dog that passed away last year, and the other one is a distant relative.

Here are the clones (in her lap; the other dog, looking glum on the couch, is apparently the black sheep of this clan).

Streisand told Variety that she took cells from her dog Samantha, who died last year:

Streisand revealed that two of her dogs, Miss Violet and Miss Scarlett, were cloned from her 14-year-old Coton du Tulear Samantha, who died in 2017. Before Samantha died, Streisand had cells taken from her mouth and stomach.

“They have different personalities,” Streisand says. “I’m waiting for them to get older so I can see if they have her [Samantha’s] brown eyes and seriousness.”

On Twitter, people seemed to be in agreement that cloning your dog—and volunteering this information in an interview—is very weird.

Will this become a trend? Will people (uh, wealthy people) start collecting cells from their current dog so that they can make a copy in the future? Will people start cloning other pets? Welcome to the second month of 2018, I guess.