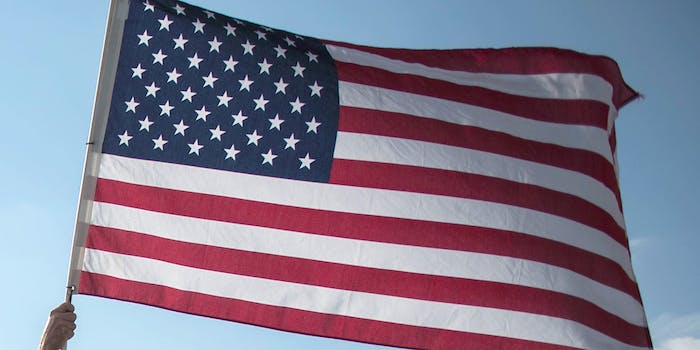 If you think it isn’t offensive, think again.

This week, Governor Jerry Brown signed a bill that bans the word “alien” from California’s labor force laws. S.B. 432, trumpeted by State Sen. Tony Mendoza (D-Artesia) is the first legislation of its kind in the entire country.

“The word ‘alien,’ and any law prescribing an order for the issuance of employment to ‘alien,’ have no place in the laws of our state and, more importantly, should never be the basis for any employment hiring,” said Mendoza after the bill was passed. Elaborating on why it was important to remove the word from California laws, he declared, “Alien is now commonly considered a derogatory term for a foreign-born person and has very negative connotations.”

The new California law could set a national precedent, and rightfully so. If the largest state in the country can ban the “alien” from its laws on noncitizens, others can and should follow suit. But as California has done in governance, so should everyday people with their language. It’s time we recognize this word as the racial slur it is, and that removing it from our culture will only make things better for all immigrants.

Rep. John Lewis just posted on FB: "There is no such thing as an illegal human being." What say you?#DropTheiWord https://t.co/45OpBFEQot

There’s a lot wrong with the word “alien,” but its original emergence as a tool of political propaganda explains why we still use the word today. The term rose to prominence between the 1950’s and 1990’s, with federal agencies pushing it heavily in the ‘70s—so that they could galvanize the public’s xenophobic fears enough to argue for a larger budget. It was around this time that “alien” began to show up in newspapers as well. “The combination of all of these forces—which weren’t trying to work together—made the idea of undocumented immigrants being a problem a particularly powerful cultural force,” writes the Pacific Standard’s Francie Diep.

Yet as our understanding of immigration shifts, so does the way we talk about it. By 2013, a Pew research study found that the appearance of the phrase “illegal alien” had dropped down to as low as 5 percent in major news publications. Both the Los Angeles Times and the New York Times have amended their language policies when covering immigration to restrict the use of the word, while the Guardian has considered dropping it as well. Given that the use of “alien” was always a confusing way to describe immigrants, there’s never been a better time for all of us to consider dropping the word too.

If you think calling someone an “alien” isn’t offensive, think again. The current battle over the term recalls the debate over a certain “I-word” that organizations like Race Forward encouraged newsrooms everywhere to drop: “illegal.” As CNN’s Charles Garcia wrote in 2012, “When you label someone an ‘illegal alien’ or ‘illegal immigrant’ or just plain ‘illegal,’ you are effectively saying the individual, as opposed to the actions the person has taken, is unlawful.”

What does it mean for a person, and not their actions, to be unlawful or “illegal?” It implies that their entire existence is a crime. It suggests that they don’t have the right to think, to live, to be. It means that, as Diep puts it, you are “potentially even less than human.”

The “less than human” factor is the prime reason to get rid of the term “alien.” The word is, by definition, meant to be alienating, divisive, and to separate human beings from a kind of “other”—positioning American citizenship as full humanity, but denying that same regard for foreign-born residents.

The “less than human” factor is the prime reason to get rid of the term “alien.”

Taken to the furthest extent, it has frightening potential. Immigration attorney Shahid Haque-Hausrath describes this eloquently, writing, “For some, this [word] may serve as a defense mechanism to avoid feeling sympathy for undocumented immigrants, many of whom are separated from their children or loved ones when they are deported.” And Elie Wiesel, a Holocaust survivor and Nobel Peace Prize winner, wisely stated that “No human being is illegal.”

It is extreme to jump from immigration to an atrocity such as the Holocaust, and we should be careful not to compare two distinct instances of oppression too closely. But in either scenario, the language used to describe people considered “other” has had the power to shift perceptions, and has even given way to violence. For example, in 2009, Shawna Forde of the anti-immigration militia the Minutemen led a robbery on a Mexican family which resulted in the death of a nine-year-old girl and her father. And many undocumented trans prisoners, as Fusion reported, face rape, assault, and other forms of personal and systemic harm while being detained by Immigration and Customs Enforcement (ICE).

There’s much more work to be done, but not all is lost. So far, hundreds of thousands of undocumented immigrants who arrived in the U.S. before they turned 16 have been deferred from deportation, granted legal employment, and able to attend college under President Obama’s Deferred Action for Childhood Arrivals act. Meanwhile, multiple states have passed their own Development, Relief, and Education for Alien Minors (DREAM) acts, granting tuition equity to undocumented immigrants (despite the inclusion of a questionable term in the expanded acronym).

But when a man like Donald Trump can make outrageous claims about immigrants in his presidential campaign announcement, and still go on to lead the Republican primary polls, it becomes clear that some perceptions of immigrants in this country remain amiss. Despite Trump’s claims that undocumented immigrants are “bringing crime” and all other manners of nefarious activity into the U.S., there is little data to back his assertion up.

The Center for Immigration Studies have found that there is, “no evidence that immigrants are either more or less likely to commit crimes than anyone else in the population.” And studies from the Migration Policy Institute conclude that, “immigrants are disproportionately unlikely to be in prison.” These negative stereotypes about ideas say a lot more about the rest of us than they do about the few undocumented Americans who have actually committed these crimes. As Marielena Hincapie, the Executive Director at the National Immigration Law Center told PBS Newshour, “This is not about immigration, but the perception, the narrative out there really has its basis in the scapegoating, the race.”

@AllenWest Stop using that word! No one is 'illegal alien' or isn't that a violation of the constitution that said 'All men are born equal'?

As is typically the case with words such as “alien,” removing it from the lexicon is an important part of creating lasting change—as individuals and through public policy.

If our misconceptions about undocumented immigrants can be interpreted as racist, it stands to reason that terms like “alien” and “illegal”—which aid in the scapegoating of immigrants—align with racist ideologies. It’s important to become more cognizant of how we discuss the issue, and the people who face social and legal marginalization because of their citizenship status. And as is typically the case with words such as “alien,” removing it from the lexicon is an important part of creating lasting change—as individuals and through public policy.

Although freedom of speech is a much valued, if not contested birthright in America, it doesn’t mean we shouldn’t practice careful consideration. Calling undocumented immigrants “aliens” is outdated, dehumanizing, and reinforces harmful stereotypes.

Banning the word from our legislation isn’t going to redirect the immigration debate overnight, but it is a significant step in the right direction.