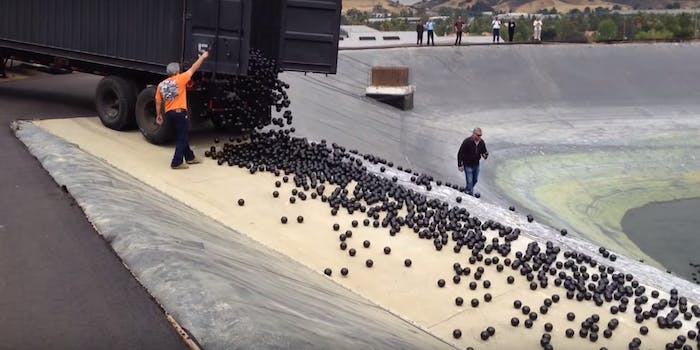 There's a solid scientific reason for all these balls, but mostly we're just mesmerized by them.

Over the past few days, we’ve seen a lot of balls on social media. GIFs of balls. Videos of balls. Specifically, millions of black plastic balls rolling in a hypnotic mass into a reservoir in Los Angeles.

The “shade balls” are being deployed to combat evaporation and protect reservoir water from dust, wildlife, and contaminants. About 96 million balls have been gradually deposited into the reservoir at Sylmar, California, at a cost of 36 cents each. This strategy is predicted to save $250 million over the next ten years, helping L.A. retain more of its water during California’s ongoing drought.

But at the moment, the balls are best known for being weirdly mesmerizing to watch as they roll into the water.