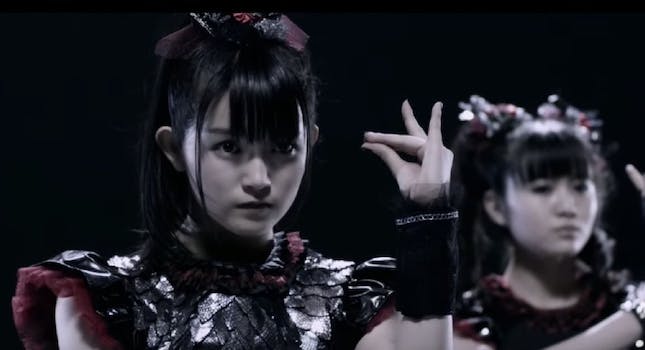 Maybe the Babymetal haters are the real babies?

Babymetal, everyone’s favorite cute Japanese metal band in Gothic Lolita drag, are more than just a novelty act at this point. They’re legitimately one of the coolest metal bands of all time.

This was confirmed, albeit somewhat trollishly, when Babymetal won Metal Hammer’s 2016 reader poll for best album of the century.

And the “real” metalheads can’t handle a cute, metal-as-hell idol group defeating their faves. The Facebook comments on the poll announcement indicate extremely high levels of salt about the results, which only makes Babymetal’s victory sweeter.

“So your saying a fucking pop band with metal playing in the back ground, which I’ve never seen the musicians get any credit for, is the best album of the century? Probably not. There are actual bands with talent ya know, like slipknot, machine head, mushroom head, disturbed, godsmack, old school korn, not the dub step garbage. Fuck, I’ll take the first three Lincoln park albums over this shit any day. Lincoln park is more fucking metal than baby metal,” writes Chad E. Slone, in a comment with more than 100 “likes.”

Thanks for your opinion, Chad. No doubt “Lincoln Park” appreciates your support. However, Babymetal is the winner.

“All this proves, is that the average voter on this poll is a 15-year old emo kid, that likes bands like babymetal and slipknot. Oh and apparently your ‘critic'” are as well,” writes Imre Dijkstra. Better luck next time, Imre. If you’d like your favorite band to win a popularity poll, maybe try liking more popular bands? For example, the band Babymetal is very popular right now.

“Unfollowed. No one voted for this. So you are telling me a band who has been out for not even 10 years with virtually no albums can win metal band of the century when it is only 2016. I would rather have saw bands like lamb of god. Killswitch. In flames.Fucking even nightwish. You know mainstream yes but albums that kept metal alive in the 21st century. Babymetal has contributed so little and is so new that this pole is a complete joke much like every slipknot daily update and cory interview. Judging by the hundreds of complaints even from baby metal fans this was a publicity stunt bought and paid for. Fuck you metal hammer for selling out your loyal fans who put up with your horrible shit in hopes you will change. Unfollowed for life,” writes Douglas Wood.

It seems a large number of voters would have rather saw(??) Babymetal, though. Just some food for thought.

Whether you really like Babymetal or not, it’s a delight to see them shake up the heavily dude-centric world of metal and watch the old guard buck against anything new and different. Especially when the new, different thing is crazy popular and brings new fans to the genre.

Maybe it is the Babymetal haters who are the babies in this situation?

That pick is not going to play with the snobs who want technical virtuosity or even genre purity. Iowa was one of those teenage rebellion records that ’90s kids owned in high school during reign of Linkin Park and Limp Bizkit, and it only managed a 68 on Metacritic.

“Those who’ve moved beyond efforts to scare mom and dad will do well to steer clear, though they’ve probably made that choice already,” wrote the AV Club at the time.

As you can imagine, metal nerds are pissed that this is the alleged best record of the past 15 years.

and yesterday, they said that iowa from slipknot is the best album from 21st centruy. rly, metal hammer is going down

Is Metal Hammer just brilliantly trolling? Would it change anything if they were? Critical culture in 2016 is fantastically weird and exciting.