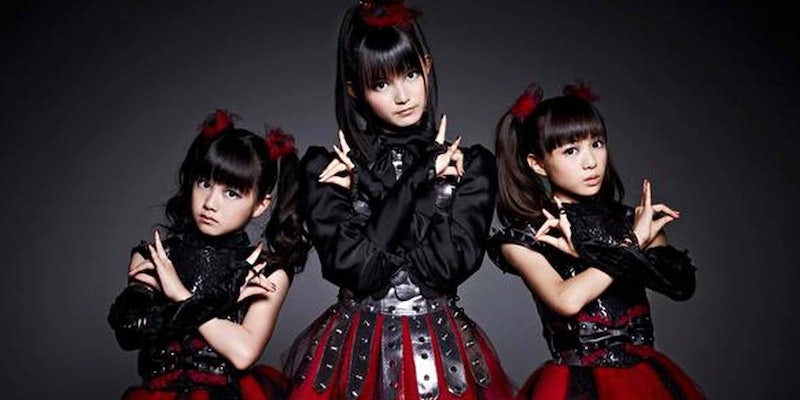 Say hello to your new favorite thing ever.

In an age when nearly every song ever recorded is available at a moment’s notice, it’s easy to get cynical about music. Everything’s been done before and we have a never-ending Spotify playlist to prove it.

Flying in from Japan like a flaming battle axe covered in glitter and bubble gum is Babymetal, a band whose pitch-perfect execution of an absolutely insane concept has the potential to instantly banish any thoughts of ‟it’s all been done” from your brain.

The premise behind Babymetal is simple: Take a trio of Japanese teen girl pop stars, choreographed dance moves and all, and have them sing over hard-charging death metal riffs. Even the band’s name is a reference to the idea’s gonzo novelty. “We want to be the only one in the world,” singer Su-Metal said in an interview with Razor TV. “We use the ‘Baby’ because we are newborn, a new genre.”

The band released its debut, eponymous full-length album last month. Check out the music video for the album’s first single, entitled, ‟Give Me Choco!”

Things of note: 1) The chorus on this song is nefariously catchy; 2) This may be the best metal song ever written about how awesome it is to eat chocolate; 3) The people playing their backing music are dressed as skeletons; 4) If you show this to an actual metalhead, he or she will never forgive you.

As one Jezebel commenter wrote in response to a post about the video, “Somewhere in Norway there is a metalhead in corpse paint standing in a forest crying tears of blood.”

People who really love teen pop will probably feel the same way. But, for those of us whose musical tastes fall somewhere in the middle, Babymetal is kind of like a magical, leather-clad, fire-breathing, sonic unicorn. In fact, lots of people have a soft spot for Babymetal. The band currently has the number two best-selling album in the iTunes store.

The three band members, whose ages range from 14 to 16, formed the group as an offshoot of ‟idol” group Sakura Gakuin, whose music sounds a lot closer to the standard electronic pop music that dominates charts around the world. “Before joining this band, all of us, including our parents, didn’t know what metal music was,” band member Moametal told Razor TV.

Check out this clip of Babymetal playing with famed Taiwanese metal band Chthonic:

And also watch this video for a more Dio-esque tune: