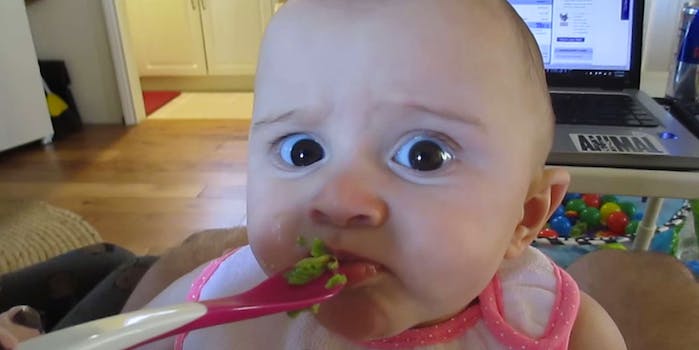 Adorable baby rebels against the tyranny of avocados

It is an incontrovertible fact that avocados are delicious. They’re filled with healthy fats, packed with potassium, and are the core ingredient in guacamole. And who doesn’t love guacamole?

This adorable baby, that’s who. In a clip that’s gone viral over the past week, a baby named Autumn is fed a spoonful of avocado by her parents and her reaction is, well, less than positive.

As soon as it hits her lips, Autumn looks around frantically trying to escape. But there is no escape. Her eyes widen in terror. She lacks the motor and linguistic skills to put up a fight or talk her way out of this jam. The airplane is going into the hangar, whether Autumn likes it or not.

On one hand, Autumn’s skepticism is natural. Avocados are kind of weird. They’re bright green and mushy. They’re supposedly a fruit, but they only superficially resemble other fruits. But what babies like Autumn and noted avocado antagonist Sen. Ted Cruz don’t understand is that their food priorities are all out of whack. For example, look at this insane recipe for avocado stuffed with garlic shrimp.

Avocados are the king of fruits and all must bow down—including babies. Especially babies.