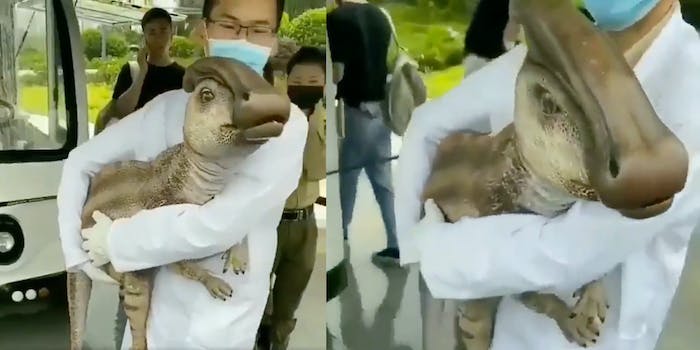 A video of a purported cloned dinosaur is going viral.

A video featuring a purported cloned dinosaur out of China is going viral. While anything seems possible in 2020, the video is not what it’s made out to be.

On Sept. 26, a tweet by a verified account, @odiomistweets, posted the video, along with the claim that the video features the first dinosaur cloned by scientists in China.

In the video, a man in a lab coat is holding a baby “dinosaur” as it lets out a bellow.

More popular accounts later bolstered the video. In a since-deleted tweet, Rex Chapman posted the video—but not with the claim the dinosaur is a clone.

The dinosaur is actually an animatronic puppet from a Jurassic World exhibition, according to Latestly.

All that has happened in 2020, however, seemingly led a number of viewers to believe @odiomistweets’ claim “The season finale of 2020 is gonna be a RIDE Y’ALL. BUCKLE UP ashjdkdkd,” one user wrote, quote-tweeting the post.

The year was kicked off with the prospect of World War 3 and then Kobe Bryant’s death. The coronavirus officially became a pandemic for the U.S. in March. Murder hornets, Pentagon-released UFO videos, and the recorded police killing of George Floyd—and the subsequent thousands of protests against police brutality and systematic racism—later followed.

It seems as if the world is dealing with one traumatic event after the next, so cloned baby dinosaurs walking amongst humans really didn’t seem all that far-fetched—not for the year 2020, at least.