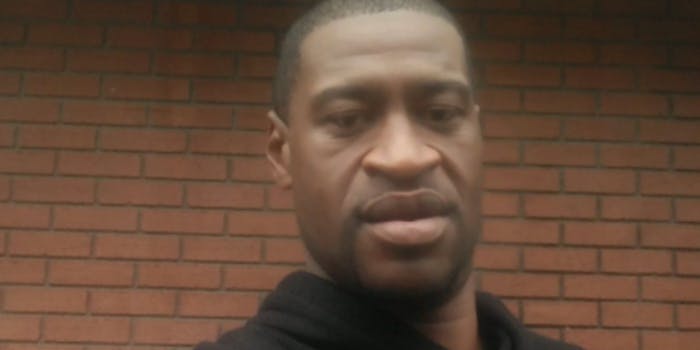 Leaked footage from two bodycams shows the moments that led up to George Floyd’s death at the hands of Minneapolis police.

The video, obtained and published by the Daily Mail on Monday, comes from the cameras worn by officers Thomas Lane and Alex Kueng.

The footage begins with officer Lane knocking on Floyd’s passenger side window before pointing a gun at his head.

After the officer holsters his firearm, Floyd can be heard begging the officer not to shoot him as he’s pulled out of his vehicle.

When the police attempt to put him into the back of their SUV, Floyd states that he suffers from severe claustrophobia.

Floyd appears to momentarily resist the two officers as they attempt to put him in the vehicle.

A struggle ensues and Floyd is forced into the car before falling out the opposite door. That’s when officer Derek Chauvin, who arrived on scene with officer Tou Thao, can be seen grabbing Floyd and kneeling on his neck.

Viral cellphone footage of the incident picks up where the bodycam footage leaves off, showing Chauvin leaning on Floyd’s neck for nearly nine minutes.

Chauvin was subsequently charged with murder while the other three officers involved were charged with aiding and abetting murder.

Floyd’s death sparked protests across the country that have continued to this day.

An investigation is now reportedly underway into how the video was leaked. While transcripts of the arrest had previously been made public, the judge overseeing the case had ruled that the bodycam footage could only be seen in the courthouse.